I was trying to tell you about Rise Up and Shout! but you know the old saying about a picture and a thousand words?…check out Rise Up & Shout! MySpace. 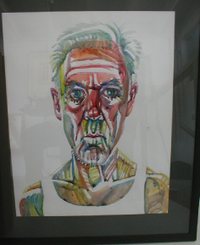 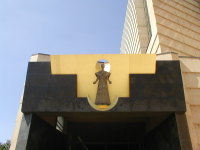 I’m off to Los Angeles today to attend Rise Up and Shout! the special event on Saturday, September  9th, produced by the Los Angeles Gay Men’s Medicine Circle to benefit White Crane.

I’m really excited about it and the opportunity to visit with Malcolm Boyd and Mark Thompson, sit for a portrait with Don Bachardy and, later, work with White Crane Institute Advisory Board member, Robert Croonquist to produce an oral history video on the San Francisco Hula Palace with bon vivant and activist, Lee Mentley.

L.A. is my old stomping grounds, so it will be good to see old friends. Now if I could only remember how to drive on a freeway!

Attended the memorial service for Eric Rofes at the LGBT Community Center in Manhattan last night. I met earlier with Chris Bartlett, Eric’s partner in the Gay Men’s Leadership Academies to discuss the planning of the second Academy in September (if you haven’t registered go here) and then we made our way over to the Center for the service.

We had a little time to sit. Crispin Hollings, Eric’s handsome husband, was there and we visited a while. Then Perry Brass arrived so we all talked about his early organizing work.

The memorial service was inspiring and touching. The speakers included a childhood friend of Eric’s from Commack, David Klafter, who spoke lovingly of his friend, and Eric’s special gift for friendship. Suzanne Pharr,   the first director of the historic Highlander Research and Education Center in Tennessee. Richard Burns, Executive Director of the LGBT Community Center, and an old friend of Eric’s from his Boston days spoke movingly of Eric’s early role in lifting the then very localized gay movement to national standing and the organizing of the first March on Washington.

Equally importantly…shockingly…infuriatingly, Burns related the story of how the coroner’s office in Provincetown initially refused to acknowledge Crispin and Crispin’s wishes for Eric to receive an autopsy and be cremated. If there was any doubt of how tenuous our rights are as gay people…here is a man who had been one of the primary organizers of the GLBT Rights movement, who had the mayor, the executive directors of NGLTF, Lambda Legal and every imaginable power of attorney, piece of paper, domestic partner registration in hand…in a state where gay residents even HAVE the right to marry, and these authorities needed to be reminded of their own laws, and Crispin’s rights as Eric’s life partner.

We were serenaded not once, but twice by the inimitable New York City Gay Men’s Chorus, singing "Love Lives On" and "Sing Me To Heaven."

The speakers were a dazzling panel of bold names from our community: Urvashi Vaid, Jeff Montgomery from the Triangle Fund, Chris Bartlett, of course, and the brilliant humorist and monologist, Kate Clinton (who wryly, sadly noted, "Eric had one heart attack and dies. Dick Cheney has four and doesn’t even seem to be phased by it. Maybe there is no justice?") Clinton spoke of having had coffee with Eric his last morning in Provincetown…any town…and remembered how he insisted, always, on speaking of his erotic life; Insisting that we could not work to achieve sexual liberation and NOT talk about sex!

Crispin, still obviously mourning deeply, related his walk through Eric’s place in Provincetown that morning he arrived, seeking he said, some presence of Eric.  His grief was palpable, but the strength of the love these two men shared was right there, too.

"We cannot bring the dead back to life…Finding ways to regain mental health and perspective will be challenging, but gay men are not alone in these tasks. We are part of a large and increasing population of Americans who somehow manage to face the bizarre psychic deformations and powerful existential questions which arise in the wake of extreme events. We stand alongside political refugees from Eastern Europe, immigrants who have survived the Cultural Revolution in China or terrorism in Central America, combat veterans… Our plight is shared by abused children and battered women, as well as people who live their entire lives victimized by poverty, gang violence and drugs. We are not alone in our suffering.

…I hope to live my middle-age years with the ability to be present and engaged in a way I haven’t been able to be for most of the past decade…When I enter old age, I hope to be able to speak to people abou the worlds in which I’ve lived, and look back with a perspective that integrates anger and grief with appreciation and even humor.

…To see men embrace and love each other in response to neither loss nor terror revives my dreams from a life long ago. To watch masses of men dance together, celebrating raw life-giving powers of music and desire, forces me to acknowledge that the human spirit is not easily subdued. When once again two men can kiss hard on the mouth, as neither victims nor survivors nor captives, then peace and order will settle over the tribe and life will again move forward."

We are so much poorer a people without this man and so much richer for his having been with us.

I know it’s only the end of July, but that means it’s soon to be August, and before you know it, it will be September and the wonderful event, Rise Up and Shout! will be happening. 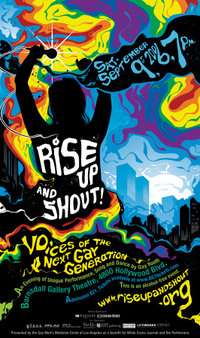 The brainchild of Mark Thompson, Malcolm Boyd, Don Kilhefner and the Los Angeles Gay Men’s Medicine Circle, Rise Up and Shout! will be a benefit for White Crane.

Rise Up and Shout! will spotlight emerging talent in a very special and innovative show to be held on Saturday, September 9, 2006 at the Barnsdall Theater, located adjacent to the historic Hollyhock House in Griffith Park, Hollywood. An audience of more than 300 people is expected  and discussions are underway to televise and videotape the event so it can be broadcast on gay cable television!