I admit to a fascination with “World Music.” I still think of myself as a drummer, even though I haven’t sat in a drummer’s circle or played around a sanctuary bonfire with my djembe in a decade. And to this day, if Ladysmith Black Mambazo is playing anywhere, I’m there. Alas, occasionally this music can be more anthropological than danceable.

So it was particularly “attention grabbing” when I was listening to the inimitable Steve Post on WNYC-FM one Sunday morning and he played a didgeridoo piece. There is, of course, something viscerally primal about the deep buzz of the Down Under wind instrument; something between a nature buzz and the chanting of Buddhist monks. The sound is at once primitive, but also other-worldly, of some very earthy place and of deep space and time, too.

The music Post was playing is from a modern group called Dreamtime. Dreamtime has a collection of music available on iTunes or Amazon that I am able to locate: Didgeridoo (Etherean Music, Inc. 2000).
The music combines traditional didgeridoo playing (I’m sure I hear the familiar ringing baritone of a djembe in there) with modern instrumentation and contemporary electronic, as well as interviews and additional liner note information about Australia's aborigines along with indigenous chants.

And while the cut Cave Dance is almost a field recording in its earthy simplicity — just the whir of the didgeridoo and homemade rhythms — the aptly titled Tribal Techno matches the lead instrument to a mixture of organic and electronic percussion. This kind of cultural and musical blending isn't new, and Didgeridoo doesn't take the concept in any direction that so-called World Music hasn't gone before. But it's a nice package, very listenable and earnest in its intention to explore the aboriginal' culture and music. Between tracks of pulsating didgeridoo rhythms and percussion, voices of tribal elders and sounds of wildlife from Australia's Outback, Dreamtime’s Didgeridoo combines to form a world music journey you can move to.

This is an excerpt.   Subscribe today and keep the conversation going!  Consider giving a gift subscription to your friends who could use some wisdom!  If there's an article you want that was not excerpted online, copies of this issue are available for purchase.  Contact us at editors@gaywisdom.org 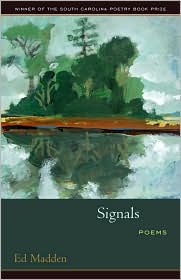 Ed Madden teaches English and Women’s and Gender Studies at the University of South Carolina.  He’s also a hell of a poet.  The publication of a book like Signals heralds great things for lovers of honest poetry that captures the lyrical beauty of life.  I spent a few hours reading this book, contempling the words and images.  I found them populating my mind.  I found a deep resonance to the questions I hold in my heart as a Gay man in the world and one deeply in love and partnered.

Along with his academic bona fides Madden serves as writer in residence at the Riverbanks Botanical Gardens in Columbia, South Carolina.  One sees evidence of this connection to the natural world in Madden’s work.  In poems like “Cabin Near Caesar’s Head” there is a gorgeous attention to the botanical splendor of the countryside.  Again and again one is — I don’t know what other word to use but — blessed by a precise litany of names — the luscious names of trees and flowers.  There is such great attention here and such care taken in creating miniature pictures in the mind.  I have to add that this collection is of importance for those grown thirsty for poems about the love of men, for Madden breaks the drought throughout this book. What’s most refreshing is the exercise doesn’t seem forced or premeditated.  Madden is writing plainly but with intention.
Signals has a number of poems that speak to the peculiar nature of the South’s ever-present racial history.  Others have done this.   But Madden is writing from his perspective as a gay man partnered with another.  This happens best in the poem “Confederates,” a poetic account of a day marching against South Carolina’s confederate-laced flag.  When a woman asks what the two white Gay men are doing at the march, the question has an immediate percussive ring that lays bare the joint allegiances Gay men and people of color should hold at this point in history.  It’s startling and affirming at the same time.  I can’t recall another poet writing of these things so effectively and convincingly.

Last October, after many years of being an admirer of his work, I had the good fortune to read with him at the Atlanta Queer Literary Festival.  Hearing him read from these poems is a memory I will long treasure.

Signals is the resulting book from Madden’s winning the 2008 South Carolina Poetry Book Prize.  It is the greatest gift South Carolina has given me.  The gift is yours for the taking. 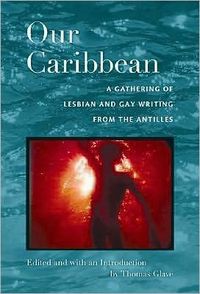 Our Caribbean:
A Gathering of Lesbian and Gay Writing from the Antilles
Edited and with an introduction
by Thomas Glave
Duke University Press $24.95
ISBN-10: 082234226X,  416 pages
Edited by Thomas Glave

A collection like Our Caribbean: A Gathering of Lesbian and Gay Writing from the Antilles doesn’t come across too often.  I can pretty much remember all of them.  There’s the two Gay Sunshine anthologies: My Deep Dark Pain Is Love and Now the Volcano. Then there’s Jaime Manrique’s two great anthologies Virgins, Guerrillas and Locas: Gay Latinos Writing About Love, and Besame Mucho.  Both of those came out in 1999 as did Erasmo Guerra’s anthology Latin Lovers.  Anthologies by Gay people of color are rare.  It’s “off the radar screen” at the major (or minor) publishing houses.  This is too bad because anthologies like Our Caribbean reminds us that the breadth of Gay and Lesbian experience is more wide and varied, and richer, then we normally realize.  I need to point out that an anthology like this is also of tremendous help to Gay and Lesbians of Color.  I recall many years ago trying to make my Cuban mother understand what it meant that her child was Gay.  She acted as if it were something I’d “caught” here in the United States.  It wasn’t until we were both able to enjoy Reinaldo Arenas’ memoir Before Night Falls that she “got it” and was able to recover her own memory of the Gay people she knew in Cuba. In her upbringing—like that of many religious people—there were “no gays” around her.  It was an unspoken thing.  But Arenas’ book revealed to her a part of her culture she had forgotten and a perspective that deepened her own understanding of identity and exile.  I can never give enough thanks to those authors and publishers that allowed that healing and acceptance to begin.

Thomas Glave has collected an impressive collection of writings by some of the leading writers from the Antilles.  Arenas’ work is here, as is the work of Virgilio Piñera, Audre Lorde, Andrew Salkey and Assotto Saint.  I believe the inclusion of these now ancestral Gay and Lesbian writers gives the collection its deep roots. In the case of Lorde and Saint—two writers who are considered “American” by many of their fans—their presence in this anthology reminds us that they were deeply Caribbean voices.  Glave, who wrote the brilliant Lammy-winning Words to Our Now: Imagination and Dissent, has given us a collection that reflects the literary richness of the Caribbean and its diaspora.

It is a rich trove of fiction, memoir, nonfiction and poetry and includes much work translated from the Creole, Dutch and Spanish.  Standouts for me included the descriptive ornamental beauties of Aldo Alvarez’ “Property Values,” Glave’s defiant and call to democracy “Whose Caribbean? An Allegory, In Part”, Juanita Ramos’ narrative autobiography, Rane Arroyo’s “Saturday Night In San Juan With the Right Sailors” and “Almost A Revolution For Two In Bed,” the gorgeous patois of Shani Mootoo’s paean to Indian food, “Out On Main Street.”

One warning though.  You will fall in love with many of the authors in this book.  The iconic ones—Arenas and Lorde for example—their work is widely available. But for the younger ones still living, we can only hope to find more of their work in the future.  For the many writers in non-English languages, access to their work is difficult if not impossible to find (Virgilio Piñera and Pedro De Jesús).  Others just need more publishers to give them the space and opportunity to be read.  Perhaps this book will precipitate that.  These thirty seven authors deserve it and our need for their perspective is dire if we are to know our selves more thoroughly.

This is an excerpt.   Subscribe today and keep the conversation going!  Consider giving a gift subscription to
your friends who could use some wisdom!  If there's an article listed
above that was not excerpted online, copies of this issue are available
for purchase.  Contact us at editors@gaywisdom.org