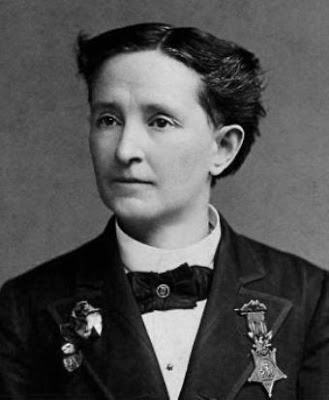 DR. MARY EDWARDS WALKER, American feminist and physician, born (d: 1919); American feminist, abolitionist, prohibitionist, alleged spy, prisoner of war, surgeon, and the only woman to receive the Medal of Honor. Although she was called by her male enemies “the most distinguished sexual invert in the United States,” Dr. Edwards, although certainly a transvestite, was not necessarily a Lesbian. She was an ardent feminist, obsessed by the feminist dress-reform movement begun by Amelia Bloomer, and a mover and shaker in stirring up trouble whenever she was refused the right to do anything a man was permitted to do.

A qualified physician, she had to force her service on an unwilling Federal government during the Civil War; she eventually was awarded the Congressional Medal of Honor for her work; and she became the first woman the U.S. permitted to dress in male attire – a right granted by Congress, no less! That she lived together with a younger feminist, Belva Lockwood, after she divorced her husband is provocative, but hardly proof that either of them were Lesbians.

Eventually, Dr. Walker moved out of step with her sister feminists because her taste in dress offended them. It was one thing to wear men’s trousers – that was at least practical – but it was quite another thing to go whole hog, as did Mary Walker. She affected shirt, bow tie, jacket, top hat and cane. A very full discussion of this fascinating woman appears in Jonathan Katz’s Gay American History.