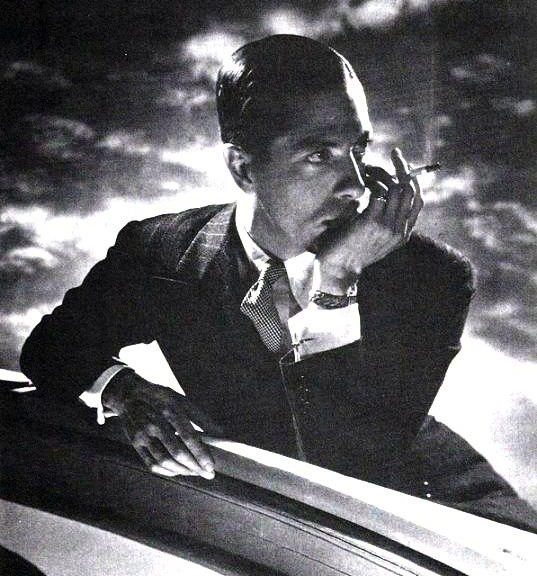 NICHOLAS DE GUNZBURG, magazine editor and socialite, born (d. 1981); This is the man who brought you Calvin Klein. Literally. He was the Editor-in-Chief of Town & Country and an influential fashion editor at Vogue and Harper’s Bazaar. Born in Paris to a wealthy ennobled Russian banking family called Günzburg; the umlaut was dropped and the aristocratic particle “de” added in the 19th century. His father was a Russian Jew, and his mother was Polish-Brazilian, which perhaps accounts for his exotic good looks. The Günzburgs were, among other things, financial patrons of Russian dance impresario Sergei Diaghilev and his famed Ballet Russes in Paris during the first decades of the century. He was himself (shall we say?) a “patron” of Vaslav Nijinsky until he was swayed by Diaghilev. Living the life of a bon vivant in the Paris of the 1920s and 1930s he was popular with the artistic and social elite of Paris. He spent money lavishly, and the parties he gave included extravagant sets designed by architects and artists. His costume balls and parties of pre-war Paris were discussed not for the next week, but the next forty years.

The Danish film director Carl Theodor Dreyer met him in 1931 and this led to their co-production of the classic horror film Vampyr (1932) which used music, sound effects, and dialogue in an impressionistic way. Loosely based on the vampire novella Carmilla by Joseph Sheridan Le Fanu the hero “David Gray” was played by Gunzburg under the screen name Julian West.

After his father’s death, he learned that the remaining family fortune proved to be nothing more than an illusion. Left with only the money he had in a checking account, he purchased his passage to America and, like any self-respecting queen, used what was left to throw one last, great party in Paris- “Le Bal de Valses“, and then set off for America. For this farewell he co-hosted a costume ball with his close friends the Prince and Princess Jean-Louis de Faucigny-Lucinge during the summer of 1934. “Le Bal de Valses“, or “A Night at Schönbrunn,” had as its theme the Imperial Court at Vienna in the late 19th Century.

Girlfriend knew how to do poverty!

Arriving in America in 1934, Gunzburg settled first in California. He was one of many European emigrés who sought refuge in the growing colony of artists in Hollywood. Here he met Erik Rhodes, an actor, with whom he would live for a number of years after World War II. Gunzburg soon headed back east, this time to NYC, which was his home for the remainder of his life.

Gunzburg arrived in New York in 1936. True to his aristocratic and somewhat bohemian lifestyle, his certificate of Immigration from the French Consulate General in New York listed him as “sans profession”, without profession. So naturally he soon became a fixture of the American fashion industry and would build a career from his impeccable and unerring eye for fashion. Slim, impeccably dressed, always elegant he looked the part and was often known as just the “Baron” or “Nicki” as he himself often wrote his name.

One Vogue writer described him as, “A slender, attractive man with a really dry wit, a gift for mimicry, and a sharply developed taste for the simple but cultivated amenities of living.” We might call him the perfect man, in the perfect place and the perfect time.

Gunzburg also was a mentor to three young fashion designers who would go on to dominate the industry Calvin Klein, Bill Blass and Oscar de la Renta. In other words, pretty much all of American fashion. Klein – perhaps Gunzburg’s most famous protegé (whom he met in the mid-1960s) spoke of him in an interview with Bianca Jagger and Andy Warhol in Interview magazine, published not long after the Baron’s death:  “He was truly the greatest inspiration of my life… he was my mentor, I was his protégé. If you talk about a person with style and true elegance — maybe I’m being a snob, but I’ll tell you, there was no one like him. I used to think, boy, did he put me through hell sometimes, but boy, was I lucky. I was so lucky to have known him so well for so long.”

Recalling one of Calvin Klein’s first major fashion shows his mentor said that immediately after the show, a nervous Klein sought out his opinions on his new designs, and on whether the event had been a success or failure. The response to his protegé, a wry assessment — chilly, but supportive and polite: “You showed great courage.”

Eventually, the fame of these protegés came to eclipse his own – indeed, they became household names, while Gunzburg was famous mainly within the circles of the fashion, literary, and social worlds of New York, London, and Paris.He muddled through.

Having searched widely for just the right lake, Gunzburg was summer resident of New Jersey for the last twenty years of his life. He found and bought an  island in Highland Lake called “Hemlock Island,” constructed a causeway to the island, and built a summer house decorated and furnished with fastidiousness, which showcased his eye for the simple, austere and elegant. At the head of the causeway leading to Hemlock Island was a sign which simply said “N de G”.

He was portrayed by Alan Badel in the 1980 film Nijinsky in which  Alan Bates played Sergei Diaghilev.

Gunzburg died at New York Hospital at 76 years of age. He was buried the following spring near his summer home in Glenwood Cemetery, with a small private service at which Bill Blass, Oscar de la Renta, and Calvin Klein were among the mourners.