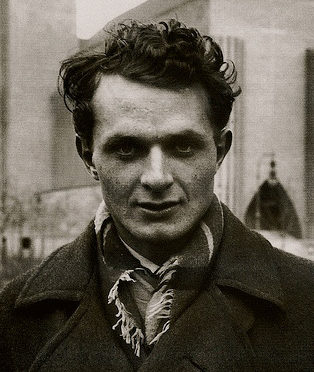 STEPHEN SPENDER, English poet (d. 1995); Of the “English trinity,” Auden-Isherwood-Spender, only the latter is rarely given his due. Although Spender is mentioned in many biographies and studies of modern English writers, his appearances are walk-ons, where he delivers his lines and disappears for another hundred pages.

Even in Isherwood’s Christopher and His Kind, he seems to recede into the background, despite his height and unruly shock of hair. In reading these works one gets the impression that Auden took his virginity and that Isherwood gave it back to him. What is his version of their youthful friendships? Since this important poet, editor, and critic’s autobiography appeared more than forty years ago, when one had to talk and write in whispers, we can hardly know.

Spender’s changing attitudes towards homosexuality and heterosexuality have caused him to be labeled bisexual, repressed, homophobic, or simply someone so complex as to resist easy labeling.

Many of his friends in his earlier years were Gay. Spender himself had many affairs with men in his earlier years, most notably with Tony Hyndman (who is called “Jimmy Younger” in his memoir World Within World). Following his affair with Muriel Gardiner he shifted his focus to heterosexuality, though his relationship with Hyndman complicated both this relationship and his short-lived marriage to Inez Maria Pearn (1936-39). His marriage to Natasha Litvin in 1941 seems to have marked the end of his romantic relationships with men. Subsequently, he toned down homosexual allusions in later editions of his poetry. The following line was revised in a republished edition:

Whatever happens, I shall never be alone. I shall always have a boy, a railway fare, or a revolution.

It was later revised to read:

Whatever happens, I shall never be alone. I shall always have an affair, a railway fare, or a revolution.

As late as 1994, Spender sued author David Leavitt for allegedly using his relationship with “Jimmy Younger” in Leavitt’s While England Sleeps. The case was settled out of court with Leavitt removing certain portions from his text.