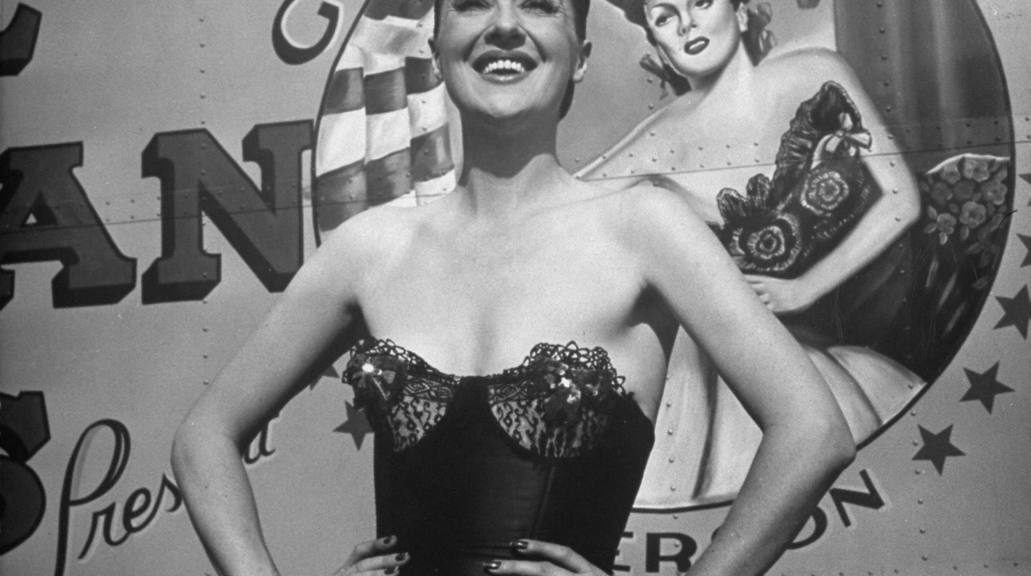 Rose Louise Hovick, better known as GYPSY ROSE LEE was born on this day in Seattle, Washington, although her mother, gay icon, Mama Rose, (soon to be played by none other than that other gay icon, Barbra Streisand  — OMG! —in a remake of the immortal show biz film story Gypsy) later shaved three years off both of her daughters’ ages. She was initially known by her middle name, Louise. Mama Rose was a teen-aged bride fresh from a convent school when she married John Olaf Hovick, who was a newspaper advertising salesman and a reporter at The Seattle Times. Louise’s sister, Ellen Evangeline Hovick (later better known as actress June Havoc), was born in 1913.

Eventually, it became apparent that Louise could make money in burlesque, which earned her legendary status as a classy and witty strip tease artist. Initially, her act was propelled forward when a shoulder strap on one of her gowns gave way, causing her dress to fall to her feet despite her efforts to cover herself; encouraged by the audience response, she went on to make the trick the focus of her performance. Her innovations were an almost casual strip style, compared to the herky-jerky styles of most burlesque strippers (she emphasized the “tease” in “striptease”) and she brought a sharp sense of humor into her act as well. She became as famous for her onstage wit as for her strip style, and—changing her stage name to Gypsy Rose Lee—she became one of the biggest stars of Minsky’s Burlesque, where she performed for four years and was frequently arrested in raids on the Minsky brothers’ shows.

While she worked at Minsky’s, Gypsy Rose Lee had relationships with an assortment of characters, from comedian Rags Ragland to Eddy Bruns. In Hollywood, she married Arnold “Bob” Mizzy on August 25, 1937, at the insistence of the film studio. Gypsy was at one time in love with Michael Todd and in 1942, in an attempt to make him jealous, she married William Alexander Kirkland. They divorced in 1944. While married to Kirkland, she gave birth on December 11, 1944 to a son fathered by Otto Preminger she named Erik Lee who has been known successively as Erik Kirkland, Erik de Diego and Erik Preminger. Gypsy Lee was married for a third time in 1948, but eventually divorced.

Both Gypsy Rose and Mama Rose were avidly bisexual, with Mama Rose tending more to being Lesbian. Gypsy and sister June Havoc continued to get demands for money from their mother, who had opened a boardinghouse for Lesbians in a 10-room apartment on West End Avenue in New York City (the property rented for her by Gypsy), as well as a farm in Highland Mills, NY. Rose shot and killed one of her guests (Rose’s female lover who had made a pass at Gypsy, according to an account provided by Gypsy’s son, Erik). The incident was explained away as a suicide and Rose was not prosecuted. Mother Rose died in 1954.

In the early 1940s Gypsy Rose Lee was one of the occupants of the famous “February House” in Brooklyn, NY. The February House was a Victorian brownstone, which, for a period of a mere 18 months, June 1940 to December 1941, was home to some of the most celebrated English and American artists of the mid-20th century. It was given its name by Anaïs Nin, who noted that several of the residents had their birthdays during that month.

The conjunction of these extraordinary talents might well form the premise of a Tom Stoppard play. The very gay nucleus consisted of W.H. Auden, Carson McCullers, Benjamin Britten, Peter Pears, Gypsy Rose Lee, and Paul and Jane Bowles. Salvador Dali, Lincoln Kirstein, Leonard Bernstein and George Balanchine were among the later gayer satellites. And it was here, for a time, that Gypsy Rose Lee and Carson McCullers became lovers.

It is generally agreed that it was Gypsy Rose Lee who gave the house both its heart and its celebrity. Intent on intellectual respectability, Lee planned to write a mystery, The G-String Murders, under the tutelage of this eccentric household. And it was here that McCullers mapped out her two masterpieces, The Member of the Wedding and The Ballad of the Sad Café, and Auden and Britten collaborated on the latter’s first opera, Paul Bunyan. It was also here that, inspired by Auden, Jane Bowles began Two Sophisticated Ladies, and, inspired by Jane, Paul Bowles discovered that his true vocation was fiction rather than music.