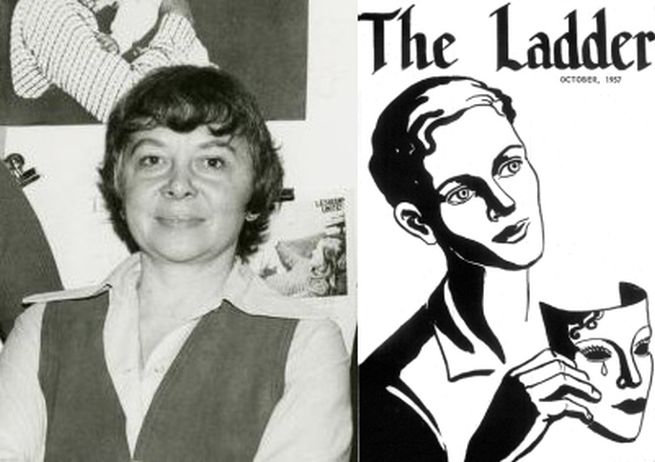 On this date the pioneering Gay Rights activist RUTH SIMPSON was born (d. 2008).  Simpson was the founder of the United States’ first Lesbian community center, an author, and former president of Daughters of Bilitis, New York.

As president of the New York chapter of Daughters of Bilitis (DOB), Simpson organized Gay rights demonstrations and educational programs for DOB members during the period 1969-71. Several times when NYC police, without warrants, illegally entered DOB’s Lesbian center in lower Manhattan, Simpson stood between the police and the DOB women.

On three occasions she was cited for court appearances by the police. She was also arrested at a Women Against Richard Nixon (WARN) rally, along with Ellen Povill, Ti-Grace Atkinson and Flo Kennedy, and spent most of a day in jail until the women’s attorney gained their release.

In Ruth Simpson’s 1976 pioneering work From the Closet to the Courts she documented her history in the early days of the Gay movement and the actions taken to achieve justice, civil rights and equal treatment under the law for the large, diverse LGBT population.

Ruth produced a weekly, hour-long television program, “Minority Report”, in Woodstock, New York. She served as the Board President of the Woodstock Public Library from 1982-2001 and continued as an Officer until her death. Ruth has had her poetry published in literary magazines, and she has given a number of talks on college campuses in the Hudson Valley area.