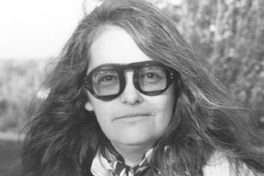 KATE MILLETT Feminist writer and activist, was born. American feminist writer and activist. She is best known for her 1970 book Sexual Politics. The book offered a comprehensive critique of patriarchy in Western society and literature. In particular, Millett indicted what she saw as the sexism and heterosexism of renowned novelists D.H. Lawrence, Henry Miller, and Norman Mailer, contrasting their perspectives with the dissenting viewpoint of homosexual author jean Genet.

Kate Millett received her BA at the University of Minnesota in 1956, where she was a member of the Kappa Alpha Theta sorority. She obtained a first-class degree, with honors, from St. Hilda’s College, Oxford in 1958. Sexual Politics was her published PhD thesis from Columbia University in 1970. In a memorable incident, she was a guest on a late-night television program in the UK when a drunken Oliver Reed tried to kiss her, uttering the words “give us a kiss, Big Tits.” Reed was made to leave the set.

Millett moved to Japan in 1961. Two years later, Millett returned to the United States with fellow sculptor Fumio Yoshimura whom she married in 1965, but they split up in the 1970s. The two divorced in 1985. She was active in feminist politics in late 1960s and the 1970s. In 1966, she became a committee member of National Organization for Women. In 1971, Millett started buying and restoring fields and buildings near Poughkeepsie, New York. The project eventually became the Women’s Art Colony Farm, a community of female artists and writers.

Her book Flying (1974) tells of her marriage with Yoshimura and her love affairs with women. In 1979, Millett went to Iran to work for women’s rights, was soon expelled, and wrote about the experience in Going to Iran. Sita (1977) is a meditation on Millett’s doomed love affair with a female college administrator. Upon its publishing, she went from being the darling of the feminist movement to a pariah.

Perhaps because of her reluctance to become a spokesperson for the women’s movement, Millett and her work failed to achieve the lasting popular recognition enjoyed by other second-wave feminists such as Steinem, Betty Friedan, and Germaine Greer. However, Sexual Politics and several other books by Millett were reissued in 2000, an event that may lead to renewed appreciation of the groundbreaking nature of her writing, art, and activism