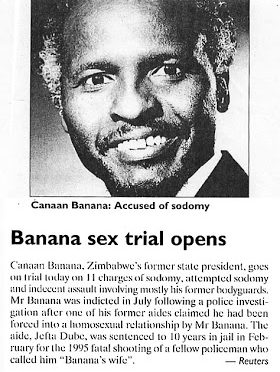 The first president of Zimbabwe CANAAN BANANA was born on this date. A Methodist minister, Banana held the largely ceremonial office while his eventual successor Robert Mugabe served as prime minister.

Born in colonial Rhodesia (renamed Zimbabwe after independence), early on Banana studied to become a teacher, and was ordained as a Methodist minister in 1966, following studies at Epworth Theological College in Harare, the Kansai Industrial Centre, Japan, the Wesley Theological Seminary, Washington DC, and the University of South Africa, Pretoria. He soon became involved in politics and the decolonization of Zimbabwe. After independence in 1980, Canaan was lauded as the country’s first president following the bloody and prolonged war of independence that toppled Ian Smith’s white-only regime. Robert Mugabe was his prime minister. He served until 1987 when Mugabe consolidated his power and became president. After his term as president Banana played key roles in mediation and peacemaking.

He played a significant part in the search for peace in other parts of Africa. In 1989, he led the eminent persons’ group of the World Council of Churches that sought to intervene in apartheid South Africa, and was the Organization of African Unity’s special envoy to civil war-torn Liberia.

The former president’s later years were clouded by scandal. In 1997, Rev. Banana was arrested in Zimbabwe on charges of sodomy, following accusations made during the murder trial of his former bodyguard, Jefta Dube. The charges related to accusations that Banana had misused his authority while he was president to coerce numerous men in positions of service (ranging from domestic staff to security guards, and even members of sports teams for whom he had acted as referee) into accepting sexual advances.

He was found guilty of eleven charges of sodomy, attempted sodomy and indecent assault in 1998. He denied all charges, saying that homosexuality is “defiant, abominable and wrong,” and the charges against him were “a mortuary of pathological lies” intended to destroy his political career. In 2002, his wife Janet Banana confirmed that her husband was indeed homosexual, even though she considered the charges against him to be politically motivated stating that, “Mugabe used the issue of my husband’s sexuality as a way of mobilizing opinion against Canaan. Mugabe was jealous of Canaan’s international platform” and that was “regarded as the most likely contender to Mugabe’s position. The attack on Canaan was an attempt to eliminate any hint of opposition…I.” Mugabe’s horrific record of anti-homosexual animus and bias make this charge highly credible.

Banana fled to South Africa while on bail before he could be imprisoned, apparently believing Mugabe was planning his death. He returned to Zimbabwe in December 1998, after a meeting with Nelson Mandela who intervened to secure leniency in Banana’s treatment. Banana was sentenced on January 18, 1999 to ten years in jail, nine years suspended and he was also defrocked. He actually served six months in an open prison (being allowed to leave for shopping) before being released in January 2001, and died of cancer in 2003 in London. The Guardian Unlimited, however, claims that Banana had traveled to South Africa, where he eventually died, in order to receive appropriate treatment for his cancer. He was buried in Zimbabwe without the full honors expected to be accorded to a former head of state.