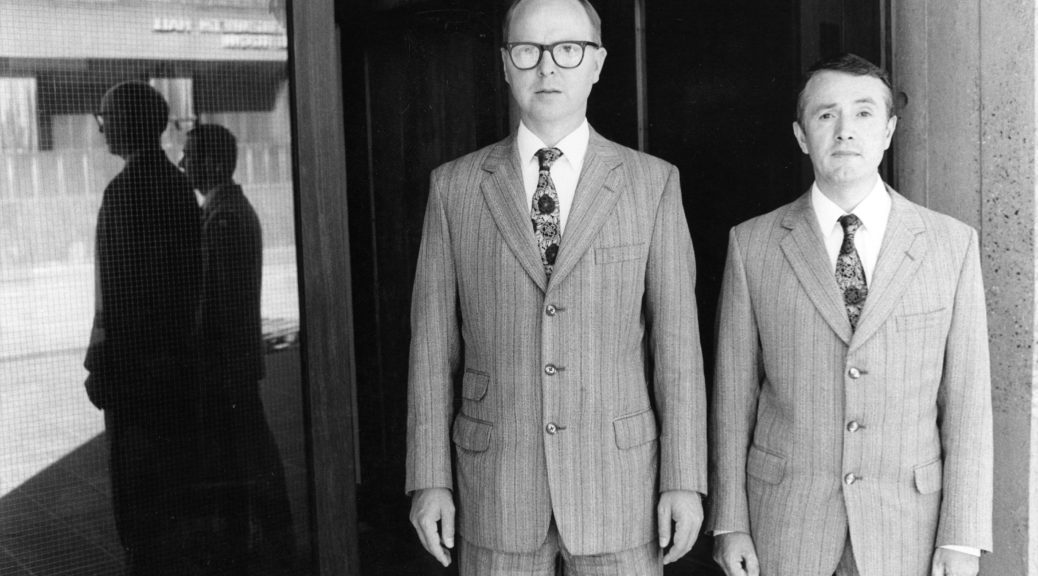 Today is the birthday of the British artist and one half of the artistic duo “Gilbert and George” GEORGE PASSMORE. Born in Plymouth in the United Kingdom, to a single mother in a poor household, he studied art at the Dartington Hall College of Art and the Oxford School of Art. He met Gilbert Proesch in 1967 while studying sculpture at St Martins School of Art, now Central Saint Martins College of Art and Design. The two claim they came together because George was the only person who could understand Gilbert’s rather poorly spoken English (Proesch was born in Italy). In a 2002 interview with the Daily Telegraph they said of their meeting: “it was love at first sight.” They got married in 2008.

For many years, Gilbert & George have been residents of Fournier Street, Spitalfields, East London. Their entire body of work has been created in, and focused on, London’s East End, which they see as a microcosm. According to George, “Nothing happens in the world that doesn’t happen in the East End.” The pair are perhaps best known for their large-scale photo works, known as The Pictures. The early work in this style is in black and white, later with hand-painted red and yellow touches. They proceeded to use a range of bolder colors, sometimes backlit, and overlaid with black grids. The artists themselves frequently feature in these works, along with flowers, youths, friends, and Christian symbolism.

In 1981 Gilbert & George won the Regione Lazio Award (Torino), in 1986 the Turner Prize, in 1989 the Special International Award (Los Angeles), in 2007 they won the South Bank Award, as well as the Lorenzo il Magnifico Award (Florence).  In 2005 they represented the UK at the Venice Biennale. Their 2007 retrospective at Tate Modern was the largest of any artist held at the gallery.  In December 2008 Gilbert & George were awarded an Honorary Doctorate by London Metropolitan University.