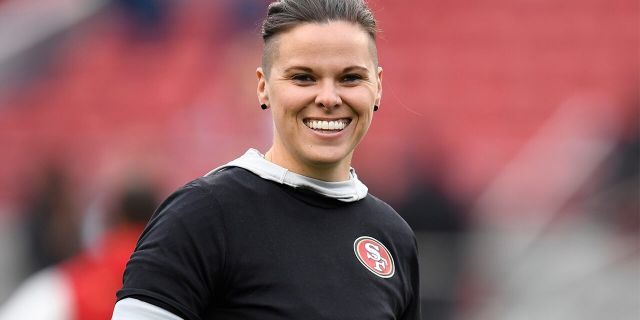 KATIE SOWERS is an American football coach born on this date; Sowers is the first woman to coach in the Super Bowl under the San Francisco 49ers’. She became the first-ever LGBTQ+ coach in NFL history upon coming out prior to the 2017 season when she first joined the 49ers. She has been an offensive assistant coach with the San Francisco 49ers since 2017. She started her American football career playing in the Women’s Football Alliance. Upon her retirement as a player, she joined the National Football League in 2016 as a coach for the Atlanta Falcons training camp.

In 1986, Sowers was born in Hesston, Kansas. She started playing American football at the age of eight. For her post-secondary education, Sowers attended Hesston College and  and Goshen College in the 2000s before resuming her studies at the University of Central Missouri in the 2010s. At Central Missouri, Sowers graduated with a master’s degree in kinesiology in 2012. She has a twin sister, Liz, who plays football as a wide receiver.