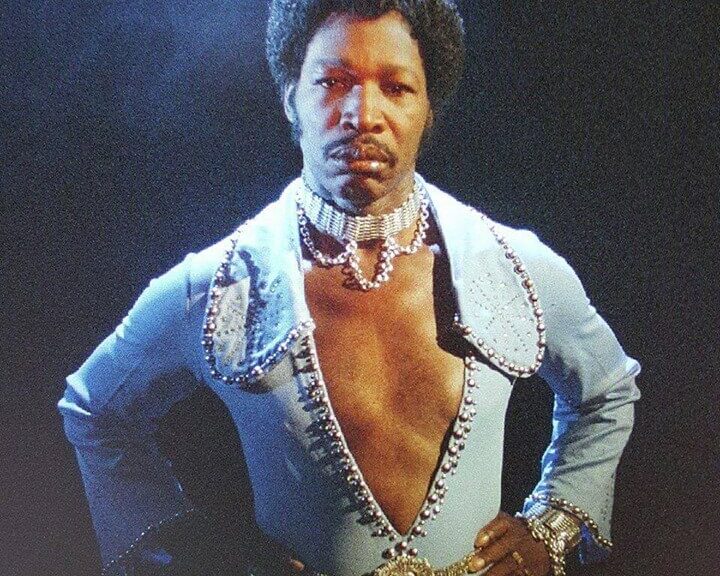 RUDOLPH FRANK MOORE, also known as known as Rudy Ray Moore, was an American comedian, singer, actor, and film producer died on this date (b: 1927). He created the character DOLOMITE, the pimp from the 1975 film Dolemite and its sequels, The Human Tornado and The Return of Dolemite. The persona was developed during his early comedy records. The recordings often featured Moore delivering profanity-filled rhyming poetry, which later earned Moore the nickname “the Godfather of Rap.” Actor and comedian Eddie Murphy portrayed Moore in the 2019 film Dolemite Is My Name.

Moore was born and raised in Fort Smith, Arkansas, and eventually moved to Akron, Ohio, and then Milwaukee, Wisconsin. In Milwaukee, he preached in churches and worked as a nightclub dancer. He returned to Akron, working in clubs as a singer, dancer, and comedian, often appearing in character as Prince DuMarr. He joined the US Army and served in an entertainment unit in Germany, where he was nicknamed the Harlem Hillbilly for singing country songs in an R&B style. He developed an interest in comedy in the Army after expanding on a singing performance for other servicemen.

After his honorable discharge he lived in Seattle, Washington and then Los Angeles, where he continued to work in clubs and was discovered by record producer Dootsie Williams. He recorded rhythm and blues songs for the Federal, Cash, Ball, Kent, and Imperial labels between 1955 and 1962, and released his first comedy albums, Below the Belt , The Beatnik Scene, and A Comedian Is Born.

During the mid-1960s, Moore continued to work in nightclubs as a comedian. He began incorporating toasting and Dozens into his comedy act, and began adapting Dozens into a form of storytelling. He became regionally known in southern California. His style was widely considered far raunchier than that of more famous comedians like Redd Foxx and Richard Pryor. Moore was working in the famous Dolphin’s of Hollywood record store when, in 1970, a local man who often shopped at the store began telling obscene stories about a local character named “Dolemite”. The stories were funny, but Moore was fascinated by Dolemite. Moore created a comedy character named Dolemite, and put out three incredibly raunchy, sexually explicit, scatological comedy-musical albums in 1970 alone: Eat Out More Often, The Dirty Dozens, and This Pussy Belongs to Me. Sold under-the-counter at record stores and at live performances, each sold spectacularly well. Moore spent most of his earnings from these records to finance production of a comedy film titled Dolemite (1975). Considered one of the greatest blaxploitation movies of all time, the title character is a pimp, comedian, and nightclub owner who works to clear his name with the help of a group of kung-fu fighting prostitutes and a madam named Queen Bee.

Made for $100,000, Dolemite made $12 million and spawned a sequel, The Human Tornado. American International Pictures then cast Moore in their own blaxplotation film, The Monkey Hu$tle. He had only a small part, and the film bombed. Moore used his salary from that film to finance Petey Wheatstraw: The Devil’s Son-in-Law. It was based on a 1971 comedy bit from Moore’s album.

Disco Godfather, released in 1979, had a budget of just $100,000 like its predecessor, but it did poorly at the box office. Blaxploitation films were dying off, their blend of raunch, fantasy, and martial arts a poor fit with the increasingly bitter, violent, and gritty Black experience of the late 1970s.

Moore’s career largely derailed after this. By the end of his life, he had released a whopping 31 comedy albums. He revisited the Dolemite character in two short films in 1995 and 1996, and in the direct-to-video feature films Big Money Hustlas and The Return of Dolemite , but the character never caught on again. He tried to boost his comedy career with three live-performance concert films in 2002, but these did not sell well. Moore’s comedy albums, however, proved immensely influential. During the Golden Age of early rap, artists such as Snoop Dogg, Eazy-E, Dr. Dre, Big Daddy Kane, Old Dirty Bastard, and the Beastie Boys not only sampled his works but modeled their own styles and songs on Moore. Comedians like Eddie Murphy, Steve Harvey, Cedric the Entertainer, and Bernie Mac mimicked him early in their careers.

Moore never married. He had a succession of girlfriends, and a daughter. But in 2012, his manager revealed that blaxploitation film and comedy legend Rudy Ray Moore was actually gay and had a number of male lovers over the years.