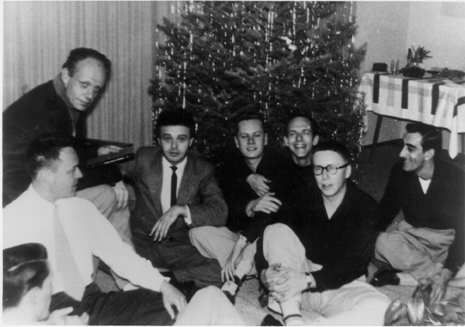 JOHN GRUBER, the last surviving original member of the Mattachine Society, one of the earliest homophile organizations in the United States, died peacefully in his home in Santa Clara at the age of 82 (b: 1928). James Finley Gruber, Jr. was born in Des Moines, Iowa. A boy scout at 13, Gruber described himself as a “typical teenager” who enjoyed relations with both men and women, and considered himself bisexual. His unpublished manuscript, “The Deviant: an Illustrated Autobiography,” chronicles his life across the 20th century year by year, including references to movies, books, songs, newspaper clippings, and images of current events, movie stars, and family photographs. His father was a vaudeville performer and music instructor who, in his search for work, moved the family to Los Angeles in 1936. Enthralled with the glamour that Hollywood offered, the good-looking young man took acting, music and dancing lessons.

In 1946, at the age of 18, Gruber enlisted in the U.S. Marines where, in close physical proximity to men for the first time, he “went bananas in the sex department.” He enjoyed the camaraderie of his fellow soldiers, even as he continued to have affairs with women, and was honorably discharged in 1949.

Gruber majored in English Literature at Occidental College and in 1950 met Christopher Isherwood, who was to become a close friend and role model. “Chris was the man I aspired to be.” Chris introduced Gruber to W.H. Auden, who was impressed that John had read his work. Chris also introduced Gruber to his landlady, Evelyn Hooker, a therapist and professor of psychiatry at UCLA whose pioneering research on gay men contributed to a change in the attitudes of the psychological community towards homosexuality, leading to the American Psychiatric Association’s 1973 decision to remove homosexuality from its handbook of disorders, and an increased acceptance by society at large.

Isherwood, working for various Hollywood studios, introduced Gruber into the heady world of Hollywood, inviting him to be his date on opening night of the play I am a Camera, based on his novel The Berlin Stories. He met Jayne Mansfield, who “made me tingle in the swimsuit area,” and remembered “watching Marilyn Monroe on a movie set one summer day reading War and Peace hidden behind a propped-up comic book.”

In April 1951, primarily as a social adventure, Gruber and his boyfriend Konrad “Steve” Stevens became the last new members of the Mattachine Society. John later relived the atmosphere of the meetings, “All of us had known a whole lifetime of not talking, or repression. Just the freedom to open up…really, that’s what it was all about. We had found a sense of belonging, of camaraderie, of openness in an atmosphere of tension and distrust. … Such a great deal of it was a social climate. A family feeling came out of it, a nonsexual emphasis. … It was a brand-new idea.” John embraced his “newly chosen family,” even if he did not fully endorse its Communist underpinnings.

Gruber often recounted how the sole extant image of the Mattachine founding members came to be. At a Christmas party Gruber, clandestinely holding a camera, nonchalantly walked across the room and midway surreptitiously snapped the photo. Harry Hay heard the click and became incensed, because the meetings were covert and it was extremely dangerous to identify members. John reassured him that there was no film in the camera. The famous photograph features Konrad Stevens, Dale Jenning, Harry Hay, Rudi Gernreich, Bob Hull Chuck Rowland, Stan Witt, and Paul Bernard.

Gruber worked at KECA radio, created a motorcycle club called The Satyrs and dated both men and women. He eventually became disillusioned with his life in the Mattachine. “I can’t talk to Harry Hay anymore,” Gruber told Isherwood. “Harry doesn’t have conversations. He delivers lectures while I sit and listen.”

Repeated trips to San Francisco in the late 1950s motivated Gruber to say goodbye to Los Angeles, and in 1960 he moved to Palo Alto, renaming himself John. “It was the most effective way I could find to escape Mom’s ceaseless calling for ‘Jimmy!’ inside my head.”

He continued to pursue his career as a teacher at Foothill College and San Francisco State University, teaching and/or tutoring at Cubberly High School, Milpitas High School, de Anza College and other schools, interrupted by a short stint at Memorex. “I loved teaching. I fell in love with every kid I ever met.”

Identifying himself as “an unmarried alcoholic bisexual teacher,” he met Beth Erickson, who became a lifelong friend, eventually encouraging him to attend his first AA meeting in 1976. Newly sober, he “set out to become a successful novelist like my mentor.” In 1984 his battle cry was “God save us from the menace of the Rigid Right and the Religious Wrong.” Always deeply contemplative, Gruber maintained,  “The relationship you have with your inner self is the most important one of your life.”

On November 12, 1998, the Society for the Scientific Study of Sexuality in Los Angeles bestowed Gruber a Public Service Award as a “pioneer and barrier breaker” in organizing the Gay and Lesbian Community. In 2000, John participated in a panel discussion at the San Francisco Public Library “Harry Hay and the Founding of the Mattachine Society: a 50th Anniversary Celebration,” and in 2006 donated his personal papers to the James C. Hormel Gay & Lesbian Center at the San Francisco Public Library.

After retirement Gruber lived quietly in suburban Santa Clara, his deteriorating health keeping him increasingly close to home, where he died peacefully and painlessly on February 27, with his dear friend Nicholas Pisca at his side.

Gay historian Stuart Timmons, who had interviewed John for the seminal books The Trouble with Harry Hay and Gay LA,  “I will always remember John fondly, as the self described gargoyle on the cathedral of the Mattachine, no pushover.  He was a sweet and generous man.”

Gruber appears in the 2001 documentary Hope Along the Wind: the Life of Harry Hay directed by Eric Slade, who commented, “He was a wonderful man, I so enjoyed knowing him. I talked to him just a month or so ago. His famous Mattachine Society Christmas tree photo was just used in a book on gay liberation. I sent him a copy of the book and we talked about it. I’d hoped to see him on my upcoming visit. Truly the end of an era.”