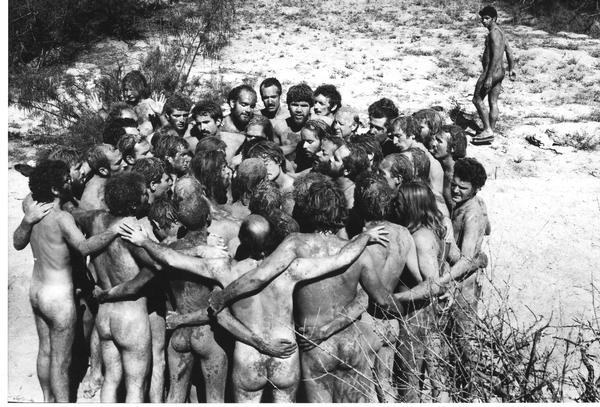 What Edward Carpenter, Gerald Heard and Harry Hay recognized was the “new city of Friends” described by Walt Whitman over a hundred years ago—a sustaining place where “robust love” might thrive, a deep source of empowerment. It has been a dream asserted by a few and glimpsed by others at crucial points in our development. The early 1950s and 1970s were times when our movement howled at the moon, briefly acknowledging that this dream could be a reality. That this rude awakening represented something instinctual, wildly alive, posed problems for our leaders. Here was nature, woolly and cloven-hoofed, taking on unexpected form. Here were luminous faces peering out on the edges of accepted reality. How strangely familiar, too, for others to suppress what they do not comprehend, to fear what they’ve been taught to distrust.

Power, status, the hierarchy of who’s on top is the real currency of American culture, and so many of our leaders have been seduced by it all. These are the tactics of assimilation and they smell of panic. Thinking we have gained so much, we have been led to settle for less than we can be.

There is a tyranny implicit in any label, and certainly the label of Gay has now been revealed as much for its limitations as for its liberations. Why not consider difference, whatever its reason, in terms of function? The concept of a faerie shaman is just one idea that indicates a purposeful role, beyond that of just political or sexual identity. In times past and in many cultures, we often assumed the tasks of the shamans—wise and creative ones—and were duly honored as such. If we can but take gay beyond society’s definition—which we have internalized—and see ourselves as part of this function, our secret will be out.

I failed in my father’s eyes, and he in mind, as, I suppose, it had been fated. More to the point, few gay men ever seem to find complete acceptance from their fathers. (And even tolerance, however honorable, cannot account for true knowing.) Gay men have even less hope of being accepted by the greater father, the world of our daily existence, which, despite tolerant inroads, remains disapproving to its core. But neither can an opposite reality—that is, the matriarchy—hold any more honest place for us. Perhaps at one time, and according to the current feminist myth, the dominant Great Mother societies of agrarian, pre-Judeo-Christian times accepted gay men as welcomed sons. But I suspect, more likely, as subservient sons, in contrast to the outlawed sons of our contemporary age.

So gay men remain suspended in a horrible dilemma. Both the matriarchy and the patriarchy have, in effect, played themselves out; and the future, symbolized through an historic union of the two—has yet to fully emerge. Gay male consciousness remains stymied, unable to come of age. This is why so much of recent gay-identified culture appears to lack deeper meaning; however fresh and guileless its messages, empowered as it is by ritual dance and sex and defiance against corrupt authority.

At what point do gay boys stop finding favor in their father’s eyes? What stories are withheld, what rites of manhood lost in that uncomprehending gaze? Now, as gay men, we must begin by finding forgiveness in each other’s eyes, seek favor in stories of our own telling — our own fairy tales, the instructional fables we need to assume a mature and ever evolving gay adulthood. And for this we need to reinvest in wonder.

By learning more fully to evoke and to balance the powers of (what were once known as) the Earth Mother and Father Sky, we can set into motion our own whiling evolution as gay men beyond definition. We will no longer suffer from the constraints of living on a fraction of a life. We will evidence harmony as men who see clearly within and thus act cleanly without. We can learn to revel in our perspective, as much as our preference, and we don’t need a name. Our freedom is our responsibility. We simply need to do our work.

But first we must take the dark fantasies of our suppressed spirits out of their closets into the powerful light of reality. We can have a vision, and, thus, a culture to affirm, until one day perhaps our fathers will knowingly proclaim: “I have one of those.”