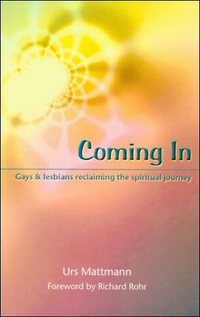 There’s an episode of the television series, “Sex and the City” where, following her divorce from Trey, Charlotte seeks guidance through a Self-Help book. Over the years, I’ve reviewed my share of them, but seldom have I had the pleasure of lingering over, savoring and learning from them as I did with Urs Mattmann’s Coming In: Gays and Lesbians Reclaiming the Spiritual Journey. Mattmann recognizes and realizes the confusion and anger many gays have with organized religion, and beyond answering questions, he makes suggestions, recommends exercises, meditations and prayers as a practical solution toward becoming a 21st Century Christian.

While perusing the contents for Coming In, readers quickly learn that Mattmann’s manual addresses topics such as "Gay and Lesbian Gifts and Opportunities," the importance of the "Partnership of Love," "Sexuality as a Source of Strength" and "Community Models for the Spiritual Journey."

Mattmann often states his mind, using himself and his lover as examples to put his theories into action.  For one thing, he reminds us that the time for debating the development of gay people is finished. Studies of the coming out process reveal that many of our lives and experiences often parallel one another. He sees gays and lesbians as mystics who can use their shared sexual energy to service the whole of creation.

He finds the word “spirituality” all encompassing, because “true spiritual experiences encompass humanity and nature, all of creation.” Because there are so many different experiences with the divine through different faiths, Mattmann is capable of identifying these spiritualities and he explores them in depth. He sees spirituality as a means toward reaching a higher level of sexual energy, yet recommends deeper exploration becoming in tune with our genitals, our chakras and how to use them for heightened sexuality as a source of strength and nourishment.

Mattmann personalized his writing when he discusses how a backache during meditation led him to address his inner pain and once accepting it, how he dealt with it. He advises regular meditation, in whichever form chosen, and integrating it into daily life. This is one method of healing the collective hurt and guilt many gay Christians feel due to the Vatican,

Fundamentalists or Protestant attempts to change gays and lesbians. Meditation, ritual, self-help groups, therapies and talking circles are other methods he recommends toward helping to heal these inner wounds.

The information in Coming In is nothing if not thorough, and Mattmann’s arguments are convincing. He cites Moses’ journey in the desert as a model for liberation, and informs readers that they need to realize that that coming out is the start, not the end of liberation. By finding a system for making statements that define our sexuality, asking questions, answering them and appreciating our experiences, we learn to use our sexuality as a source of strength. This will give the second part of the liberation process, coming in, more meaning as we use spirituality to guide our lives. When we reach this enlightenment, we discover how Queer Power can serve the world.

Unlike the multitude of other self-help books, Urs Mattmann’s Coming In is one book from which we can all learn, even people like those people like Charlotte of “Sex and the City.”

Steven LaVigne is a frequent contributor and reviewer for White Crane.  He lives in the Twin Cities.