Last night my boyfriend and I had the luck to notice that the Pedro Almodovar film "Women on the Verge of a Nervous Breakdown" was playing at the AFI Silver Theater in Washington, D.C. (well, Silver Spring, Maryland, but it’s close enough). When we got there we saw that this was just the beginning of something much more exciting.

Viva Pedro is a retrospective re-release of eight classic films by Spanish director Pedro Almodovar, all leading up to the U.S. release of his latest film "Volver" opening on November 3rd. 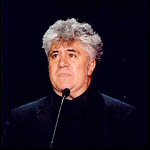 Selected theaters around the country will be showing these movies, and copies of the VHS and DVD’s have been pulled from store shelves until the series is over. The selections include: "Women on the Verge of a Nervous Breakdown," "Talk to Her," "All About My Mother," "Live Flesh," "The Flower of My Secret," "Law of Desire," "Bad Education," and "Matador."

Now I hadn’t seen "Women on the Verge" in like 10 years, and it was a very different experience watching it on video then and seeing it in the theater now. For one, I was only 20 when I saw the film and being young and naive camp humor was pretty much lost on me. No longer! Oh my god, it was a RIOT in that theater! The credits alone had my gay heart singing with glee. But the scenes themselves were just beyond compare. Pepa setting 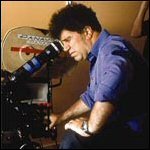 fire to the bed and putting it out with the garden hose with the look of joy and hate in her eyes, the girlfriend who had a fling with terrorists and was running from the law, the psycho wife with two revolvers in her handbag, the closeup shots of high heel shoes walking on marble, doing voice dubs for Joan Crawford movies… I mean the list goes on and on and on. It was a great experience, and if you have the chance to go out and see one of these movies, please, do yourself a favor and go!