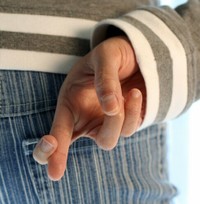 All Our Lies Holy

I do not believe
our wants
have made all our lies
holy.
Audre Lorde “Between Ourselves”

For Bo and David, who lift their brothers up, for Kathy Griffin, whose "Life on the D List" gave me the courage to write this, and for Ben, who made it past the Gates.

Note: The names have been changed to protect the guilty.

You want to talk about charlatans and snake oil sellers?

It’s a typical L.A. summer afternoon in 1986, blimps advertising cosmetic surgery, helicopters whirring, with onboard cops on loudspeakers yelling, “Come out of your house! We know where you are!” as we drive up to the West Hollywood ranch-style house to discuss the first magazine ever to be wholly dedicated to Gay Spirituality (at least insofar as L. A. goes, which, of course, is all that matters).
Two lesbians, sharply dressed and sporting short shag haircuts, greet us as we swerve into the driveway. The only reason I’ve come is because my friend Luke has invited me. He knows I’m into spirituality and a Faerie to boot.

Meg and Peg wait ‘til all four guests—all gay men—have arrived before they show us into their Better Homes & Gardens living room and seat us at a long table overflowing with pink boxes of donuts and #2 pencils. The aroma of Folger’s percolates throughout the house. I realize I need some—quick—as I’m experiencing caffeine withdrawal. When we’re all seated, they seat themselves at opposite ends of the table and introduce themselves; they are Meg and Peg, the most successful real estate agents in all of West Hollywood, and, more importantly, personal-friends-of-Lily-Tomlin-and-Jane Wagner. They’re pretty certain that the magazine will be called A Place for Us, since this title will let gay people know—I notice that they never utter the word “lesbian” or “dyke”—what the magazine is about without offending straight people.

I try to think of something a little different, so I explain that I hope that the magazine will introduce the Gay Spiritual Community to Witchcraft and Vodou. I get the feeling they don’t approve. Suddenly, Matthew turns to me and asks, “Has anyone ever told you that you look like Satan?” He pauses, and adds, “Maybe it’s the beard.” Meg nods in accord, then says, “Moving right along…we feel strongly that this first meeting needs to be about advertising. We all know that magazines can’t survive without advertising. So we’d like to have your input about how best to scout out potential advertisers. We’re thinking wine and beer.”
Matthew is a minister. Mark is a guru or something like that. But why, I’m wondering, have the rest of us been chosen? Maybe Luke knows.

I’m drifting when I begin to hear Mark murmuring something like “Blub, blub, blub.” At first I think he’s saying “blood,” but why would he be saying that? Then I think, maybe he’s really saying “Bubbie,” as he’s an awfully hot, hunky Jewish guy with gold hair and azure eyes who’s wearing a tight-fitting salmon shirt that reveals taut nipples and a silver star of David around his neck but then I think, why would he be saying “Bubbie” unless he’s missing his grandmother? Or maybe he knows that my Mom has always called me “Bubbie.” No, it’s definitely “Blub, blub, blub.” I decide to say something, anything, to distract the others from this Very-Merry-Unbirthday moment when I notice that all eyes are turned toward Mark, whose “Blub, blub, blub” is beginning to sound rather like a Tibetan Buddhist chant West Hollywood style. I blurt, “Well, it seems to me that when one considers the deep structure of Gay Spirituality…” Meg “shushes” me. This is one of the few things I simply do not tolerate. She explains gravely and ever so slowly, in the voice of my first grade teacher, who’s trying to explain to me that 1 + 1 + 1 is 3 and not 1 like they told my Catholic cousin at church, that Mark is channeling the voice of a dolphin from Atlantis. They obviously knew Mark before. I clearly need to be more respectful. Unfortunately, no one, not even Meg, seems to understand Dolphin, so we fail to grasp the oracular message Mark’s conveying.

As Mark continues to “blub,” Meg talks incessantly of advertising.  At some point, she remarks, “Peg and I just know this magazine’s going to be a great success. In fact, we’ve already decided to form the Peg and Meg’s — and, of course, you guys’ — Gay Spirit Fund from the profits we…”

I honestly don’t recall what happened after that. I just kept hearing “Advertise! Advertise! Or the eagles will come and tear out your eyes!” Or maybe it was more like “You can even dye your hair to match your gown!” It was like lost time in occult lingo. I don’t even remember Luke dropping me off. Had they spiked the Folgers? We never heard of A Place for Us or Meg and Peg again.

This is just an excerpt from this issue of White Crane.   We are reader-supportedand need you to subscribe to keep this conversation going.  So to read more from this wonderful issue SUBSCRIBE to White Crane. Thanks!

Randy P. Conner is the author of many wonderful books, all classics of gay spirituality and culture.  These include the landmark Queering Creole Spiritual Traditions, Blossom of Bone: Reclaiming the Connections Between Homoeroticism and the Sacred, and the editing of Cassell’s Encyclopedia of Queer Myth, Symbol, and Spirit.  He was interviewed by Toby Johnson in White Crane in 2005.