News arrives that one of the highest paid basketball players has come out.  Yes, dear readers, Tim Hardaway has revealed to the world that he doesn’t care what people think.  He wants the whole world to know his truth.  He’s a crazed homophobe.

Let’s diagram this paragraph shall we?  The first statement is his right I guess.  He doesn’t like gay people.  I don’t care much for hateful troglodytes.  I guess that’s my right.   His second statement is a declaration of position.  He’s a homophobe.  Also a right I guess.  He then reiterates his first statement of not liking gay people.  He reveals himself a bit repetitive but I guess that too is a right.

But his last statement is the real bit of hydrochloric acid in an otherwise acrid blurtation.  And it’s also more revealing.

"It shouldn’t be in the world or in the United States."

This statement has more of a wish tone to it.  It’s that "shouldn’t" in there.  It reeks of lawmaking.  Truth be told it has a bit of a genocidal ring to it.  A desire to wipe out all gay people.

Taken all together Hardaway has, in one fell swoop, assumed the place of definitive textbook bigot.  That he comes from a historically disenfranchised racial minority and not only holds but speaks these words just reminds us of the scope of the problem.  Reprensible knuckle-dragging misanthropy is not confined by race.

Columnist Jason Whitlock puts it well when he writes:

Hardaway is too stupid to realize that racism and hate denied black people inalienable, American rights for hundreds of years. People with Tim Hardaway’s mindset tried to keep 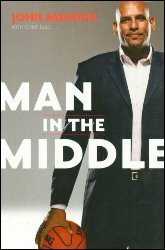 people who look like Tim Hardaway out of professional sports and every other highly sought profession.

If anyone needed an example of why John Amaechi‘s book about being gay in the NBA and on homophobia in professional sports is so important, Hardaway has provided it.  I hope Amaechi’s Man In The Middle gets more readers as a result of Hardaway’s ignorant excrementary comments.

Perhaps we should all add it to our reading lists.

One thought on “Tim Hardaway Comes Out!”