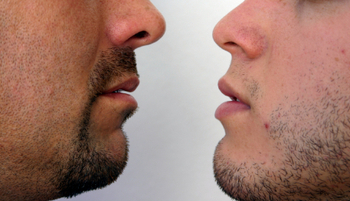 Does the Religious Right Just Need to Get Laid?
By Frank Jackson

Riding home on the subway, after great, liberating, and joyous sex at the West Side Club (that’s the bathhouses, indeed, the nefarious bathhouses), I was reflecting on how little it takes to keep a man happy. Sometimes cliches are true — you know the one about how all that uptight guy or gal really needs is to get their brains fucked out? Well, sometimes it’s misogyny, and sometimes homophobia, but sometimes — at least for me — it’s just plain true. I worry a lot about a lot of things — my job, the planet’s climate, whatever — but right now, I could care less.

I mean, I still care about global warming, and I’ll still recycle. But you know; it’s not got quite the urgency.

Most of gay spirituality, when you look at it, is about “spirituality” instead of religion. The difference is sometimes hard to pin down, but I think it’s a lot like the difference between fucking and not fucking. Spirituality gives you the juice, whether you’re chanting or meditating or having sex. Religion gives you the rules.

This is why so many charismatic religious leaders turn out to be sex offenders (and perhaps vice versa): because the juice of religion is so close to the juice of sex that I’m not really sure what the difference is anymore. And it’s not just the ecstasy of orgasm or shamanic trance; it’s also the afterglow. That peaceful state in which you can finally reflect, calmly, over what you want in your life and what’s important to you. Reflect — as in, not panic or fret or endlessly plan. That peaceful state can come in a lot of ways. Meditation is one of them. Really good sex is another.

What is it about Ralph Reed, Gary Bauer, Rick Santorum, Ted Haggard and the rest of the Christian Right nuts that makes them seem so obviously, painfully gay? It could be the stereotypically effeminate features — none of them looks like they shave much, and they all have these boyish good looks that resemble nothing so much as a pedophile’s fantasy of an altar boy. But I don’t think it’s the girly-man thing. I think it’s how repressed they all look.

And let’s take it to the next level. It’s not just that these guys need to get fucked physically (at least Haggard was getting some); they need to get fucked metaphysically also. Their whole religious outlook is one of chaste celibacy. No drugs, no sex, no pleasure, no profanity, no loud music, no long hair. What are the pleasures? Missionary sex with your wife while the kids snore downstairs? I mean, it’s nice, but everybody in the gay world knows that when your sex life is just “nice,” you need to get out more. And your partner does too.

But all they want is nice. They want nice lawns, nice houses, nice manners. Sometimes I think as though it’s impossible for people to believe the same bullshit they believed when I was fifteen and rebelled against it. But a lot of people are still at that first square. Pre-Holden Caulfield. Pre-Elvis, for Christ’s sake.

And I see how completely wrong traditional anti-gay morality is — but without that irritating righteous indignation that one hears so often in our community; more with a sense of condescension. Of course, when I think of the violence that these idiots perpetrate, I do get angry again. But from a purely ideological, intellectual perspective — they’re just dumb.

I wonder how much religion is directly opposed to spirituality. It’s like, it’s in on the game — it knows that there is real, live, hot juice in the center of a spiritual life. It knows this. But then, instead of saying “look, people, drink from the secret well!” it builds a wall around the well so high that no light gets in, and no water gets out. Religion does to Spirit what museums do to precious jewels: locks it away so securely that no one gets to enjoy it. Unlike some of my White Crane colleagues, I do think religion does a good job at warning of the dangers of indulgence. And who knows, maybe it’s true that just like people get addicted to sex, they can get addicted to the rush of anything else, be it spirituality or drugs or music or whatever kind of pleasure really gets us juiced. And maybe it’s also true that the dangers outweigh the pleasures.

But for me at least, I know my limits. I’ve had unhealthy relationships to sex and drugs before; I know what it’s like. And I know that in moderation, both are just dandy. More than that; they’re enlightening. God blesses the orgasm, and the orgasm blesses God.