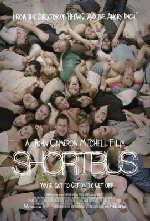 Shortbus is the best gay movie I’ve ever seen, and it’s not really even a gay movie. John Cameron Mitchell’s follow-up to Hedwig and the Angry Inch is the second film I saw in as many days unlike any I’d seen before — Borat being the other. It is, on its surface, an exploration of the sexual and emotional lives of a cluster of beautiful, young New Yorkers — a description which probably fits any number of banal films, gay or straight, we’ve seen over the last few decades. What separates Shortbus from those lesser efforts is, above all, its honesty — and this is what makes it interesting to think about from a gay perspective as well.

And intellectually: here is probably the most sophisticated film about sex since Steven Soderbergh’s sex, lies, and videotape, and before that, Carnal Knowledge. There are no simple answers. There are no simple rules.  And the characters are intelligent in a way that, I’m sorry to say, traditionalists never are — they are personally intelligent, sexually intelligent, and, I think, spiritually intelligent as well. Traditionalists, gay or straight, either never question social mores, or decide to abide by them for reasons which usually have little to do with personal fulfillment. In Shortbus, the dozen or so primary characters are always questioning, always questing, and are involved in journeys of personal growth.

To be a life-affirming gay man — and by that I mean one who neither “wrestles with the demon” of perfectly healthy sexuality nor retreats from messy realities into the fantasies of drug- and steroid- fueled Greco-Roman hedonism — is to make a certain choice: a choice for love, for pleasure, and against inherited constraint. Waking up out of straight fantasy into the truths of poly-sexual existence is a bit like smoking pot for the first time. After all the fear and judgment, you see that what the Squares have forbidden, labeled as “Harmful” or “Evil” or worse, is actually…fun. Life-affirming. Interesting. Complicated. And if you stay awake, you never go back. You never return to the world in which authority is right, and the old, dead, white, straight men who are supposedly so wise really know what the hell they’re talking about.

Maybe this is why queer people, throughout history, have been fools, actors, and masters of disguise. We see right through the hypocrisy, because here, at one of the most fundamental levels of human experience — there’s a lie that’s been told for thousands of years. Hell, half of America still believes it today, having their same quiet, missionary-position sex year after year after year.

Shortbus is our reality. Its world is one in which all is permitted, but not all of it is good for you. Polymorphous sexuality is presented, neither for titillation nor condemnation, but as what it deserves to be: a fascinating expression of human complexity. Absent are the usual poles of black and white: the insidiously cheerful public face of the Circuit, on the one hand, or a single character horrified by the depravity of it all on the other. Nor does the absence of a simple dualism mean that this is a nihilistic world like Cabaret.  Though there is an motif of decadence in the shadow of tyranny that marks both Cabaret’s time and our own. Rather, it is one in which intelligent, emotionally centered adults recognize the power of open sexuality to heal, hurt, and explore the energies the world presents to us, free of charge.

Obviously, you don’t show erect penises in the mainstream multiplexes of America, especially if they’re being fellated by hot young things who just dropped out of a A&F catalog (the film’s one, obvious dishonesty…but also a guilty pleasure) which means that most people who would ordinarily be scandalized by this “smut” (or enlightened by it) won’t get to see it in the first place.  In a way, that is, of course, a shame, because the matter-of-factness with which the film treats liberated sexuality is, itself, perhaps its single most revolutionary aspect. Yes, these are people who really go to sex parties, and they are trannies, dykes, queens, even straights. So what. Now that the frisson is over, the complicated, fascinating, and messy business of emotional connection begins.

Thank God such a mature film has been made, and that John Cameron Mitchell (who, if I were to be as honest as his characters, I have to admit I’ve always had a little crush on… I’ve been too shy to tell him when I meet him at parties) had the money, as well as the creativity, to make it. And kudos to Mitchell for refusing to compromise his, and his ensemble’s, vision with commercial or political realities. This is powerful, revolutionary art, conceived of as part of an equally powerful process of sexual and interpersonal discovery on the part of the cast. It’s the most real film I’ve seen in years, and it let me sigh in relief — thank God, someone tells it like it is — at least for the sane few who’ve thrown off the chains of shame that most people mistake for religion.

So, all of you denizens of Body Electric, Burning Man, and the other islands of sexual sanity in our nauseating sea of mutually-reinforcing vulgarity and repression: go see it right away. Buy the DVD. Support the artist, and discuss the art. Because this is your world, my world, and a world that, one day, might yet come into being.