Next to the crossword puzzle, it’s the reason I buy the New York Times every morning.

Call it morbid if you like…but I read the obituaries, or as my mother called them "the Irish Sports Pages" every morning. I have no idea from where that reference derives, aside from the trenchant wit the Irish bring to everything and a sort of philosophical resignation to the tragedies of life. Was it Ben Franklin who said he checked them every morning, and if he wasn’t in them, he carried on as usual?

A long time ago, in a California galaxy far, far away, I worked for the Los Angeles City Council as an assistant to Councilwoman Peggy Stevenson. I replaced Steve Schulte who had moved on to become the Executive Director of the Los Angeles Gay & Lesbian Community Services Center. It was 1979 if memory serves. I was 29 years old. Not long after starting the job, I met a large and voluble figure in the hallways who worked for Councilman Zev Yaroslavsky. He was 29 too. And we became fast friends. His name was Bob Hattoy and this morning I opened the Irish Sports Pages to find my friend’s name there on page C13. The headline on his obit: Bob Hattoy, 56, Clinton Aide And Powerful Voice on Gay Issues. 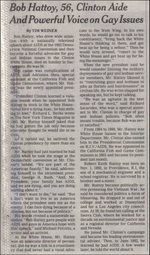 While I don’t dispute that, it isn’t how I remember Bob. Bob and I would commute to work together most mornings, driving from West Hollywood (in those ancient days only a neighborhood in Los Angeles, not a separate city) to downtown Los Angeles, braving the Hollywood Freeway. There was the time we arrived at the downtown parking lot where council employees parked, a short walk from the offices in the iconic Los Angeles City Hall building, and it was just too beautiful a day…we decided that we just couldn’t cope with angry constituents and boring committee meetings this morning. We called my boyfriend at the time, the one with the ’76 red Corvette…let’s call him RC…and had RC meet us downtown and took off, the three of us, loaded into the Vette, and drove up the coast to Santa Barbara for the day. Bob was the kind of person who could talk you all the way to Santa Barbara and make you laugh the whole way. He had a facility for saying the outrageous thing that made you slack jaw…but also made you think.

Later, RC and I moved out to Rancho Mirage and were doing the reverse commute back and forth to L.A. Hattoy would come out and spend most weekends with us. The Times says "he found his calling" and went to work for the Sierra Club at age 28, but that can’t be right. In fact, I’ll go so far as to say it’s flat out wrong. Here’s how I know: The No On Six Campaign…the despicable Briggs Initiative to ban gay people and their friends from teaching…was in 1978, and it was immediately after that that I started working for Peggy Stevenson and that’s when I met Hattoy. We were still working for the L.A. City Council at 28 and ditching work and driving red Corvettes to Santa Barbara. The NY Times has that wrong. 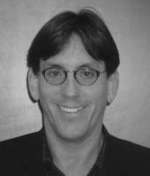 Then life happened…and I moved to the East coast and I didn’t see Hattoy again for a long long time.

Bob was the kind of friend who would suddenly show up on the news…and not in a bad way…and you weren’t really surprised. So when Bob showed up speaking at the Democratic Convention that nominated Bill Clinton it just seemed, well, normal. Bob had always been a force to reckon with…funny…witty, even…clever…maddening more often than not. But this was a moment that Bob Hattoy had been born to…a national audience for someone who knew precisely where to hit with righteous language. This wasn’t "funny Bob" …this was "a big bite of the reality sandwich" Bob, as he used to put it. Here’s what he said: "We are part of the American family," he said, speaking to Bush senior. "And Mr. President, your family has AIDS, and we’re dying, and you are doing nothing about it." It wasn’t "funny Bob." It wasn’t even "outrageous Bob." I can’t even imagine what he’d have to say about Shrub. Or the Iraq. Or VA Hospitals. The thing is, I more expected Bob Hattoy to show up on The Daily Show than in the NY Times obituaries. I actually gasped when I opened the paper and saw his name there.

He came to my home one more time after that, before disappearing into the ether of Washington D.C. politics and the Clinton administration and then back to California. I had a cocktail party in honor of my old friend and then I never saw him again. I tried several times over the past few years…since my own diagnosis…to find him. I Googled him to no avail. Oh there were stories, but nothing I could track…and I’ve tracked down and found old friends.

I read the obituaries every morning because in many ways they are some of the best mini-biographies out there, but this morning I saw how much they could miss. Some of the best parts of my friend’s life, his activism, his Vietnam War protesting, his work on the Los Angeles City Council, his work for the Sierra Club…even his stint as…was he one of the Seven Dwarves?…that would be ironic considering how big a man he was…I can’t remember now…there was always something just completely insane thinking of Hattoy as a Disneyland animated character…I think he said he was fired for insulting Snow White. How truly incisively smart Bob Hattoy was, how outrageously funny this man could be…all of this…reduced to a paragraph.

I’ll add one more this morning. It never gets any easier.

One thought on “The Irish Sports Pages – Hattoy”