OK. This is going to be a rant. In the last few weeks I’ve had the opportunity to interact with any number of large corporations. I’ve flown places, bought new computers, new software etc.

And in each case nothing…that would be nothing…has worked. It’s almost laughable…if it wasn’t so expensive and annoying. I’m going to tell you my story. None of the names of the guilty have been changed. I highly recommend not using any of their goods or services (if you can call any of this "service.") It’s a sad and pathetic story. Maybe Expedia isn’t so bad. But the rest of them….suck.

My story starts as I am flying to Wisconsin for a family event. I fly United because that’s where my frequent flyer miles are. It starts with trying to buy a ticket. I go to United (since that’s where my frequent flyer miles are, right?) and try to find a reasonable fare. The cheapest I can find is around $500 and I haven’t even rented a car yet. So I go to Expedia…and find a United flight! For much less…in fact, I end up getting a round trip ticket AND a rental car for under $300. OK…a real head-scratcher…but wait.

I get to the airport for the flight and we’re loaded on the plane with little Homeland Security drama, and we get seated in that particularly insulting and degrading way airlines have found. Why is it that they don’t load from the rear of the plane forward so we’re not tripping over everyone who got on first, or one person who can’t quite get their coat off holds up 125 other people while they struggle with their coat or their over-sized carry-on? No..instead we have to board "First Class" i.e. those people who have more money or an expense account and are willing to pay full freight, while the rest of us wait to get in and sit next to a person on one side of our seat who paid $300 more for the seat immediately next to you, while the person on the other side paid $100 less. 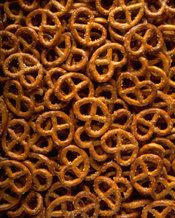 At any rate…we get on. We’re all buckled in and we push off from the gate…and sit there. Twenty minutes goes by and they announce that we have to pull back to the gate. The snacks haven’t been loaded. Snacks? You can’t fly an airplane without snacks? They better be pretty good snacks. Except we never see them. We’re about 45 minutes late taking off. But I never see any snacks.

On the way home, in Milwaukee, that hotbed of terrorist activity, my sister’s homemade jams are confiscated at the security check. Something about liquids and gels. I didn’t realize jams were gels. Or dangerous. But apparently they are. Note to terrorists: If you really want to blow up a plane, try making plastic explosives to look like cheese curds. They let the woman in front of me keep hers.

We got to Chicago. Got on the plane, pulled out from the gate and…you guessed it. There we sat for 20 minutes. Turns out, it seems, the bathrooms haven’t been properly cleaned, so we have to go back to the gate. Or we don’t. Ten minutes later the captain announces "Oops…my bad. No problem. bathrooms are clean." And then we pull out to the tarmac…and proceed to sit for the next four hours. Apparently, we’re told, there is a system shutdown or some such thing, on the east coast, due to weather. I call home to Brooklyn where I ask my partner what the weather is like. He says it’s sunny and calm. No rain. Not even any wind. When we finally arrive in New York, four hours late, my luggage appears to not have made the flight. They’re on the flight behind me. Apparently four hours isn’t long enough to get from one plane to the next.

Good thing I didn’t have any explosive jams on me when I was at the luggage pick-up. I might have used them. The clerk gives me a $25 voucher for my trouble. Great.

I use QuickBooks to keep track of White Crane finances. I had the old 2004 Nonprofit Premier Edition of it and I thought it might be wise to upgrade it to the 2007 version. Alas, 2007 wouldn’t work on Windows XP, so if I was going to replace QuickBooks, I was going to need to replace my four year old computer. Probably not a bad idea. I’ve (knock on wood) never had a computer crash on me…and I don’t want to. So I thought it would be time to replace the old one with a zippy new one. $1200 later, I get it.

The Dell printer won’t work. They replace the printer.

Yesterday, I get this notice that my Norton security system needs to be renewed. So I renew. In fact, I upgrade. Bad idea. I download the nifty Norton 360 and I reboot, and everything. And then I go to check the email on AIL…sorry, I mean AOL… and I get an error message. The security sytem won’t let me log on to AOL. So I call Norton/Symantec. In India. and this thickly accently techie in south India does some kind of whiz-bang thing and suddenly he’s taken over control of my computer. From India. And since I have a meeting scheduled, he tells me I don’t need to stick around. He’ll fix it all and if he has any problems or questions, he’ll call me back. Terrific. I come back a couple of hours later and there are these open windows, with Symantec on the label bar, but no Norton 360 anywhere. Odd. And no phone call. So I close it all down. And I call them back this morning.

I get India again. A lovely young woman, I surmise, does the same thing. Takes over control of my computer. Tried to download Norton 360…and while we’re sitting there, the two of us, me in Brooklyn, she in southern India, she gives me this lovely recipe for vegetarian biryani.

I’ll share it with you all another time. But first…

So, after I get the biryani recipe correct, she notices, as do I, that the download seems to be hung up at "Windows relocatables" or some such thing. We shut down. Reboot. Try again. She does the same thing the other guy did…tells me I can go away if I need to and she’ll fix it all. Except after I come back from making myself some lunch, there in the Notebook window she was "talking" to me on, she’s all of a sudden telling me that my QuickBooks isn’t working.

And I’m wondering why she’s trying to open my QuickBooks? Turns out, it seems, that my QuickBooks "registry key" is incomplete…whatever that means…and so, it seems, is my Windows registry. And I’ll have to call them and get them to "replace the licensing files." Except when I get them on the phone (and explain it all to two different people, twice) neither they nor I can locate this QuickBooks registration file. And I am told that one of their technicians will call me back within the next two hours.

A forty-five minutes have gone by now. I’m still sitting here. I still can’t open QuickBooks. And, unfortunately, I have to fly to Nashville in a week or so to see a dying friend. On United.

UPDATE: QuickBooks didn’t call back (almost forgot…they’re in the Phillipines). I had to call them. They tried to tell me it was "an operating system" problem…i.e. not us, it’s Dell. I get Dell on the phone and a very nice man (in Oklahoma…a little closer to home!) and he responded with no, this isn’t an operating system problem, it’s a problem with QuickBooks.

Really? To his credit he not only dialed QuickBooks into a three-way phone call (things are starting to get kinky!) but stayed on the line and instructed this other techie on what to do! Not only that, but he told me he was "taking ownership of this problem" [!!!!!!!] and gave me a direct phone number to call to follow up.

Honestly, the problems are still not resolved. QuickBooks had me uninstall my QuickBooks! Mind you, that software contains the entire financial records of White Crane Institute. I still don’t actually have the Norton Security we paid for. And, frankly, I’m pretty annoyed with Symantec/Norton for not warning users that by downloading their software…however good it might be…means you are going to have serious problems with any number of other software on your machine.