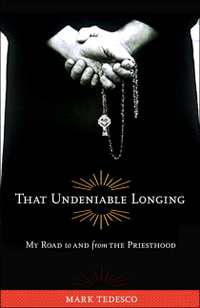 That Undeniable Longing:
My Road To and From the Priesthood
By Mark Tedesco
Academy Chicago Publishers
Hardback, 197 pages, $23.95
Reviewed by Toby Johnson

Mark Tedesco’s interesting, chatty and entertaining account of his experience as a Catholic seminarian begins with an epigraph from St. John of the Cross: “In the end we shall be judged by how much we have loved.”

When I was a young seminarian myself, the Novicemaster gave me a holy card as a Christmas present with that same quote from John of the Cross. So I started this book identifying with the author. My experience was also similar to his in being in two different seminaries. I moved from one religious order to another after the first told me to leave on account of my homosexuality (though, fortunately or unfortunately, didn’t explain that in a way that made any sense to me). I experienced it all as a series of “divine interventions” that got me from a fairly conservative order to a liberal progressive one and from that order which had a student residence in San Francisco to liberated life as a gay man in the nation’s gay mecca.

Mark Tedesco’s journey was similar, but actually more exotic than mine. Though he was an American and lived in Modesto, California, he joined an order of priests called Oblates of the Virgin Mary which had its seminary in the Italian city of San Vittorino outside Rome. So he really got the full experience of Roman Catholicism. He was with this group for a couple of years and then was told not to return from a summer leave back in California. He was emotionally lost and confused for a while, but then got assistance from a priest he knew outside the Oblates to get into the North American College in Rome (a seminary not associated with a specific religious Order). So he returned to Italy and continued his training and was eventually ordained. He returned to the U.S. and worked in a parish in Washington, D.C. while he continued his education at Catholic University. In Rome he’d become involved with a Catholic lay group which he calls Communion and Freedom (C.F.) C.F. was paradoxically both progressive and intensely conservative. (C.F. sounds very similar to the lay Catholic organization Opus Dei which received a lot of attention during the heyday of the DaVinci Code movie.)
Throughout his seventeen some years as a seminarian and then a priest, Tedesco was emotionally wracked with fears of his gradually emerging homosexuality. And the emotional stress manifested as digestive problems and general unhappiness. To deal with these issues he saw a counselor in D.C. who innocently asked him if he’d considered leaving the priesthood. Well, long before, back with the Oblates he’d been told by a “living saint” in residence at the seminary that God wanted him to be a priest. How could he leave?

By the time of the counselor’s question, however, the “living saint” had been exposed as phony (his stigmata was apparently self-imposed and his “odor of sanctity” really just a cloud of perfume he secretly doused himself with). Maybe Il Santo’s advice wasn’t so pertinent after all and that the longing for happiness was a better sign of what God wanted for him than the self-serving admonitions of Church authorities. The counselor’s question opened the possibility of change. And soon he was out of the priesthood and back in California starting a career as a high school teacher.

That Undeniable Longing is very personal, though for all that he writes about his confusion and emotional suffering the book reads more like a travelogue through Italy and the Catholic Church than a tale of psychological abuse by religious authorities. Indeed, it is quite readable and hard to put down. I devoured it in three sittings over two days, thoroughly enjoying the experience.

I’d have liked a little more explanation of how he finally reconciled his homosexuality and his religiousness. The discovery is that the “undeniable longing” that draws people to God is also what draws them to sexual love. But this seems only acknowledged tangentially. He doesn’t seem to have developed a positive “gay spirituality” or spiritual vision of sexuality as much as seen through the oppression of the traditional Catholic culture.

Tedesco relates some of his deep emotional/homosexual attachments to fellow seminarians. I really could identify with those stories; I had similar experiences in my own religious life days. But I was in the Church in the 1960s. Tedesco’s story starts in 1978. How could he have been so unaware of homosexuality?

The fact that all this happened decades after Stonewall seems a reminder to us in the gay movement that our message about the real nature of homosexuality—and especially the spiritual side of gay consciousness—isn’t reaching the youth who need to hear it. As a devout teenager longing for God, Tedesco should have been told that acknowledging his gayness would have been a faster path to the divine that going off to Rome.

All former seminarians will enjoy this book. The stories about the “living saint” and the traditional life at the seminary at San Vittorino are just precious. There’s a pedestrian honesty and simplicity about the way Tedesco relates the life of a young priest that all readers can find appealing. I enjoyed this book.

Toby Johnson is the author and editor of countless fine books like Gay Spirituality, and Charmed Lives.  He is also former publisher of White Crane Journal and currently Reviews editor. Visit him at www.tobyjohnson.com

One thought on “WC75 – Review of That Undeniable Longing”