The best reality show on television today is not American Idol, Survivor, or the Amazing Race.  Rather, the

biggest reality show on TV (or elsewhere) is the race for President of the United States.  As a spectator sport, the race for the White House goes back to the days of George Washington (before there was a White House). Every four years a group of ambitious politicians decide to compete for the coveted title of President of the United States and Commander-In-Chief of the Armed Forces. They are joined in their endeavor by their families, supporters, political parties, campaign contributors, special interest groups, blogs and the media. Occasionally, the people of the United States also get into the act.  What make the current presidential race unique are the length of the race and the people who are running in it.
It has been a year since I last wrote about this seemingly endless presidential campaign. Twelve months later, the field of candidates is smaller but the race is still as hectic and the method of choosing a president is as crazy as ever. Though I would never suggest that we return to the old smoke-filled rooms, it seems to me that our current system of primaries and caucuses benefits noone but a few well-financed candidates and the economies of Iowa and New Hampshire (and Nevada and South Carolina). States that defied the system by holding early primaries, like Florida and Michigan, were punished by the major parties to no avail. Meanwhile, the beat goes and on and on, seemingly forever. To quote Will and Ariel Durant: “Who would want to live forever, and go through an endless series of American presidential campaigns?”
One thing I neglected to write about last year was the role the media play in choosing a president.  Televised curmudgeons, political pundits, talk show hosts, and presidential historians take it upon themselves to decide which candidates are “unelectable” (and thus not worth talking about) and which candidates have the all-important “momentum.” Professional chatterboxes like Tim Russert and Chris Matthews anointed Rudolph Giuliani the Hero of 9/11, declared John McCain to be a Maverick, and elevated Barack Obama to the status of Messiah. They are also responsible for making Dennis Kucinich, Mike Gravel, Sam Brownback and Duncan Hunter (not to mention the minor party candidates) “unelectable” and thus not worthy of serious discussion. Even Ron Paul, the sweetheart of the Internet, is ignored by the pundits and the pollsters.

In certain ways, the presidential campaign of 2008 has defied all predictions. A year ago, we all thought that Giuliani and Hillary Rodham Clinton would be the respective Republican and Democratic candidates, and that we would be treated to an all-New York World Series of politics. But Clinton reckoned without the charismatic Barack Obama (and Oprah Winfrey); while Giuliani bet the house on the Florida primary and lost. In fact, it seems that after all is said and done, the two major parties might end up true to form, with the GOP “falling in line” behind McCain and the Democrats “falling in love” with Obama. Meanwhile, the media have had a field day reporting the apparent cat fight between Clinton and Obama, and debating whether electing a (white) woman is more important than electing an African-American (man). (Black women never entered into the equation.) Meanwhile, the equally contentious feud between McCain and Mitt Romney was largely ignored, mainly because both McCain and Romney are white men. (According to conventional wisdom, only women, Jews, racial minorities and queer people are thought to be “emotional,” and thus likely to indulge in cat fights.) 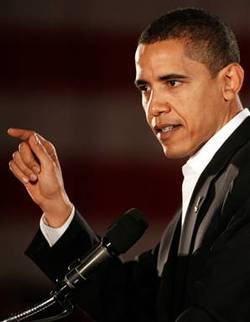 Where is the Gay, Lesbian, bisexual and transgender community in all of this? As in previous election, the Republicans are using the public’s fear of Gay marriage to bring out the social conservatives, trusting that a “Florida Marriage Protection” amendment would keep the Sunshine State red in November. Log Cabin Republicans, repeatedly rebuked by their party and desperate to find a candidate who would give them the time of day, first endorsed Giuliani and then, after the New Yorker dropped out of the race, McCain.
Meanwhile, all the Democratic candidates paid lip service to the needs of the GLBT community, even though none of them (except Kucinich and Gravel) went so far as to endorse equal marriage rights for same-sex couples. Most of the Democratic candidates took part in a candidates’ forum sponsored by the GLBT cable channel LOGO, where they answered questions from the likes of rocker Melissa Etheridge, journalist Jonathan Capehart and Human Rights Campaign President Joe Solmonese. Since then the candidates have largely avoided the “Gay issue,” except when Republicans pontificate about “family values” and Democrats include us in their vision of a new society. (“Gays and straights united!”)
If there is one good thing about the presidential campaign of 2008, is that Americans are voting in great numbers, particularly young Americans, a good sign of things to come. These new voters made themselves heard on “Super Tuesday” (February 5), when the charismatic Obama continuing his momentum within the Democratic ranks and the established McCain going a long way towards winning the GOP nomination. Meanwhile, the great reality show that is the American Presidential Race of 2008 continues, only to end in November when one contestant gets the privilege to live in 1600 Pennsylvania Avenue for the next four years. And the beat goes on and on and on. . .
Jesse Monteagudo is a freelance writer and gay American who lives and votes in South Florida.  Write him at jessemonteagudo@aol.com.