While the emotions of shame and pride are very familiar in the lives of LGBT people, I often struggle to relate to humility.  And yet having been challenged by First-Nation activists over their exlcusion in POC settings, my women freinds over my own internalized sexism, and poor-homeless immigrant Gays over being an English-educated, middle class "respectable" immigrant, I have learnt to be humble.

Humility is the joy of being divinely human, while acknowledging others right to life, humanity and liberation. The sheer act of being self-reflexive, and in the context of movement building learning to build a movement and win victories that create 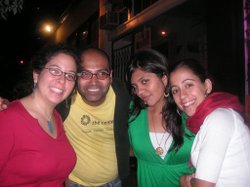 a momentum towards liberation for all!

In the spirit humility I ask my fellow Gays who are getting married, where do you think your wedding cakes are made? who do you think has been silently laundering your tuxedos and toiling to cater at your wedding ceremonies? and what will our weddings and right to marry accomplish for others?

While May 15th will be marked as the historic day the California Supreme Court ruled in favor of Gay marriage, in a not so publicized dark history of anti-immigrant torture, the news of a french bakery in San-Diego being raided on the same day by Immigration and Customs Enforcement (ICE) will be recorded. The very wedding cake, an icon of celebration is also a site of severe opression!

While I am happy for those who can finally marry and are being incorporated in to the definition of being human, and equal citizens, I also want to remind ourselves that a vast underclass of non-humans have been defined as "undocumented" "escaped fugitives" and largely unwanted. It is upon whose back, the rights of certain kinds of citizens are afforded.

I am not calling for "Gay Shame" either, because the framing of "Gay Shame" resonates with the on your face, masculinist resistance that several of us cannot afford. Instead on the occassion of Gay Pride, I am calling for Gay Humility! As a movement we need to ponder what is our relationship with multiple movements of struggles? what messages are we sending to the feminist movement, and battered women’s movement as we continue to center homo-normative notions of conjugality in our movement? and doing so which friend of ours is left behind?

As we carry our Pride flags, we also as a movement and individuals need be humble.