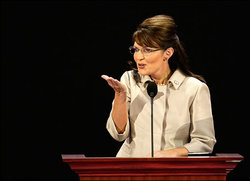 Sarah Palin, a self proclaimed hockey mom, gave a fierce speech to a raving crowd at the Republican convention tonight. I might not agree with her, but this gal is a tough cookie.

In her speech she compared the job of a community organizer with that of a mayor of a small town (making an obvious dig at Barack Obama), and reminded us that the difference lay in the fact that, the job of a mayor had responsibilities. As a long time community organizer across two continents,I beg to differ Sarah! Community organizers carry the responsibilities of saving the lives and jobs of their communities, which are ravaged by neo-liberal regimes. The basic principles of which she laid out in her speech. She framed the act of governmental disinvestment in social services as the brave act of shrinking "Big Government", but as an anti-choice, anti-gay, anti-science, anti-environment candidate, has no qualms over  government legislating rules of the very terms of family law, procreation and a woman’s right to choose what’s best for her.

Palin would have us believe that her family is just like every other family, and sometimes beyond the scrutiny of the media and the public when it comes to her pregnant teen daughter. In fact the face of families across the US and the world has always been changing! there has never been "one kind of family". According to latest US Census statistics, single parent families, mixed immigration status families, mixed generation families are on the rise currently. While Republicans call the job of providing needy families, much needed relief as "welfare dole," they have no shame in doling out millions of dollars in "corporate subsidies." Some family value that is!

In reference to the face of an ever-changing global geo-politics, Palin called upon American citizens to rally behind Jon McCain’s anti-Russia, anti-China lopsided rhetoric reminiscent of the Cold-War era. Unfortunately, with unprecedented global flows of capital, goods and labor across boundaries, that rhetoric of nation-state and war, falls short in today’s realities.

Finally, her continuous reference to "small town USA" vs the "cosmopolitan urban USA" is a way of pandering to the conservative white small town and suburban US. Recent statistics and images of immigrants marching down the Market Streets of small town America, indicate larger percentages of labor migration to small farming towns and industrial suburbs. As Latino immigrants, and Queers move out of big cities and begin to change the face of small town US, the last bastion of "pure white Americana" is trembling with fear. Thus we see myriad, local zoning codes and tenancy laws, immigration raids, policing of public parks, as an attempt to regain control over what was otherwise "pure, straight, white-American territory." If any attempt to critique her can be leveled as "sexist", then how is separating immigrant mothers from their children during inhumane immigration raids and denying us the tools to protect our own bodies "sound public policies"?

Conservative, white, America constructs poor-brown-immigrant-Queers as the "other." They fail to recognize that, within the context of the fast gloablizing village we live in, they are the "other." A very racist, imperialist, profoundly anti-humane other. The fear of the crumbling prowess of the US empire is being marketed to us as the "brave act of war, privatization, security culture and tax cuts for the wealthy." Truly brave acts are being committed everyday, by people who cross hazardous, impervious, national borders, to flee from poverty, persecution and war.

Truly brave acts are being committed every day by largely Latino farm workers across the US, who continue to grow the crops we eat, and get paid in pennies.

Truly brave acts are being committed every day by Queer school teachers, who are daring to challenge homophobia and the meltdown of the public school system.

Truly brave acts are being committed every day by poor transgender and homeless people of color, who in spite of their daily hardships, are organizing to have access to jobs and shelter.

In the end all I have to say to you Sarah Palin, "You might be a tough, white, middle class, heteronormative hockey mom, but I am a hell of a bitchy ass, brown Queen!"

So BRING IT ON!