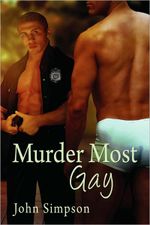 The book is told in first person by Pat St. James. Fresh out of the Academy, he finds himself sharing coffee and donuts with his superior officer on nightly patrols. That is, until evidence shows up that a serial killer is targeting gay men, attracting prey at bars and cruising areas and leaving their violated bodies all over town. Finding himself attracted to Dean, a successful investment banker, Pat finds himself in the difficult position of keeping his sexuality hidden at work. That is, until he and fellow gay rookie Hank are assigned to the case. The book draws the reader deeper into this intriguing case, as the murderous rampage reaches an almost epic nature before it’s concluded.

Erotically charged, but absorbing as well, I think Murder Most Gay is a sexy, intelligent and thought-provoking novel about the world we live in and the difficulties the men in blue face on a daily basis. I'm certain that White Crane readers will enjoy this.