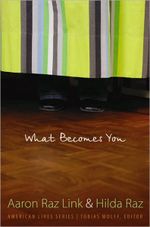 Sometimes the most obvious observations are the most profound. Early in his memoir What Becomes You, Aaron Raz Link writes, “Being a man, like being a woman, is something you have to learn.” Aaron was born Sarah and grew up Jewish in Nebraska, the daughter of a feminist-poet-professor, Hilda Raz, who is also the co-author of the book. Aaron’s story comprises two-thirds of the volume, an autobiographical journey told by a trained scientist. Aaron’s analytical point-of-view is at times clinical, as in a discussion of taxonomy and the way that we need categories to understand things. Of course, with transsexuality, we have a meltdown of generally accepted categories.

Aaron’s intelligence and survival instincts pay dividends. He recognizes early on that the psychiatric establishment and “caring professions” work against people like him: “I learned that real is a word that means ‘whatever the person who’s bigger than you are says is true.’ I learned that you can avoid ever having to go to the psychiatrist again if you just never tell anyone anything that matters.” Imagine the isolation and confusion that comes from such a realization. In this case, too, what we have is evidence of how our culture refuses to listen to kids, to take them seriously as individuals with sexuality and with some self-knowledge.

Community is an important aspect of the becoming and self-education that Link undergoes. Moving to Los Angeles helped: “I moved to the big city and hung out in what used to be called the bohemian district, is currently called the gay community, and will probably get another name just as soon as Socially Acceptable Homosexuals finish distinguishing themselves from the queers. From watching the queers, I knew enough about drag queens to know that some of them had surgery so they could be women.” In this statement, Link’s politics become clearer: he identifies with the queers. The socially-acceptable folks have never welcomed him, so the journey toward something like community becomes part of his new becoming.

Aaron sought out a support group at the Gay and Lesbian Center in LA. What an awakening. Everyone at the meeting “looked like men pretending to be everything I knew women were fighting against. I went in and sat down anyway, staring around at the panoply of stereotypes. What I didn’t bother to figure into my righteous indignation was that these were women who had only recently mustered the courage to walk down the street and found the whole world responding to a man in a dress. A stereotype is a kind of camouflage; the eye finds what it expects to find and passes over the details. At the time, I didn’t understand the difference between meeting someone else’s expectations and meeting your own.” And that is Aaron’s epiphany.

One of his biggest obstacles in that growth is her mother. The central tension in the book—and that seems to me to be just what it is—is the vexed relationship between the two authors. Hilda Raz is every bit Sarah’s mother, so she struggles—eloquently and emotionally and intellectually—to be Aaron’s mother without losing Sarah. Indeed, if this were Hilda’s book, a fitting title would be Losing Sarah.

Hilda has to come to terms with her own training and conviction as a feminist. She likes women more than she likes men; she likes daughters more than sons.  Her woman’s body becomes a site of crisis for her, as she battles cancer. So the surgical alteration of the body becomes a connection between mother and child: “I lost my breast to cancer. My ovaries and uterus, too, another illness nine months before cancer. The body Sarah changed was her own, is Aaron’s body now. Not mine. Not my body, even though it grew in my center like the very air. Not from the start. Never.”
Hilda Raz admits—and one has to admire her candor and courage—“For months, even years, I grieved hard for the loss of my daughter. . . .Now, looking back, I’m amazed that the one thing I wanted—more than anything else—was a daughter to carry on the next generation of my life as a woman. Women just want to have fun. I wanted brilliant Sarah to enlarge and expand my understanding of women and what we can be in the world, the best kind of fun for me. Instead I am learning from Aaron new uses for our story of power taken, earned and transferred from generation to generation.” A parent’s investment in a child, including the egomania and selfishness, is something Hilda has faced down, seemingly successfully , allowing Aaron his own self-determination and trajectory.

What Becomes You is an uneven book, to say the least, partly because it has an identity crisis as a text: two authors, three main characters (Sarah, Aaron, and Hilda), and a blend of memoir, theory, and social commentary and criticism. The bluntness of the confrontation between child and parent—and between self and world—may be the best element it has to offer. The understandings finally arrived at by Aaron and Hilda are clear to the reader and are illuminating and inspiring. The search for self becomes the search for community, connection, and understanding, a universal tale if ever there was one. In a short chapter titled “Men,” Link says, “If you want to survive, you must find a way to love what you are.” Learning how to do that is central to the “becoming” in the book’s title—and to everyone’s struggle to become our best selves.