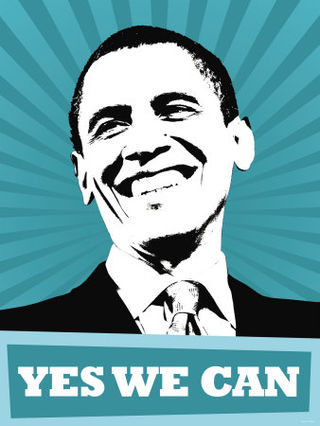 I slept in this morning.

We worked at CNN until the wee hours of the morning last night, watching and waiting for the ripe fruit of the last few states to fall into the big blue basket of the Democratic column and Obama's historic victory.

Even my big yellow dog didn't demand his Democratic victory walk until I was ready to stir this morning.

I walked out the front door of my building feeling the electricity in the air from last night, still. As I got to the corner, the crossing guard that protects the children going to that school I voted in yesterday from the onslaught of traffic at the crossroad of Classon and St. John's Place raised her voice and hand to everyone who passed and greeted them with a "Happy Obama!"

It was amazing, gratifying. Brilliant.

It was also maddening.

In many ways, the same voters who made history with the triumphant election of Obama, also opted to vote discrimination into the California constitution. And it is hard for me to separate that from my celebration of Obama's well-deserved victory.

We turn one corner, and come to another. We drive a stake into the heart of one fearful discriminatory impulse in this country that, it seems, rarely does the right thing the first time, and raise up another strawman of fear and loathing on which to focus immature and unimaginative minds.

I don't want to take anything away from this beautiful moment. But I think it is as much a sign of how degraded the American ideal has become in the past eight to 20 years as it is a moment to celebrate. And I think one of the things this President is going to require of all of us is honest self-appraisal.

And I am ashamed and dejected in equal parts to my pride and elation this morning.

I know one thing in my bones: expectations are high for this new President. Everyone is hoping that he is, as they say The One. I read an interview with President Elect Obama in which he spoke about "Gay marriage" (a term I'm not entirely comfortable with) in which he said he believed that "marriage is a sacred bond between a man and a woman" and he wasn't willing to degrade that in any way.

How can such a brilliant man be so abysmally ignorant?

So, I have high expectations of this man, too. But I am also realistic in my belief that we are all bound to be disappointed in him in some way, at some point. But here is my pragmatic expectation: that someone, somewhere, somehow sits down with this brilliant and inspiring man and explain to him in painfully exquisite detail the gulf of difference between "holy matrimony" and "marriage."

Explain to him how the former is "church" and the latter is "state" and that somehow, in the same way that that unholy alliance once justified slavery and the oppression of Black people that we now justly celebrate the death of…is now being employed to hurt loving men and women, who pay taxes and raise children (or not) and are undeserving of having their civil rights, their human rights unjustly curtailed because of the superstitious tyranny of the majority.

Holy Matrimony is a religious ritual. Marriage is a civil right.

Give LGBT people the same, equal, civilly righteous protections every other citizen in this country has under the sacred language of our constitution, no matter how many times the radical religious right wastes our time, money and souls in the pursuit of their fearful discrimination.

And we will have those rights, Mr. President-elect.

One thought on “Happy Obama”