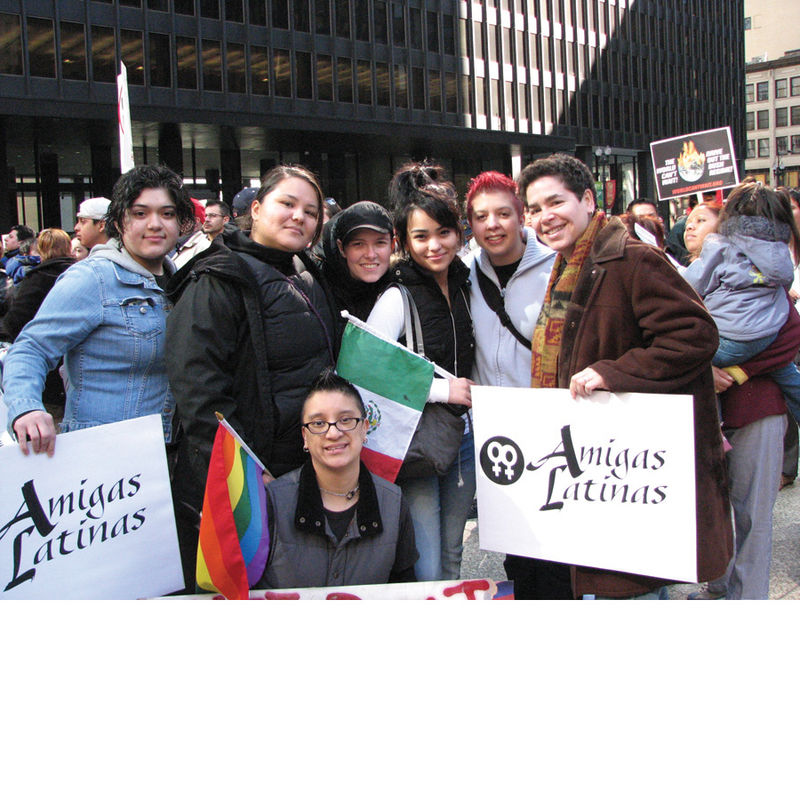 I have been watching the responses to the passage of Proposition 8 in California, Prop. 102 in Arizona, Prop. 2 in Florida and the Arkansas ballot initiative restricting the rights of unmarried couples to adopt children. I see a range of reactions and strategies emerging.

It seems Prop. 8 has become the rallying call for nationwide protest marches, leaving the ballots in Arkansas, Florida and Arizona to fall through the cracks.

More disturbing to me, as an immigrant of color, is an emerging set of responses that blame people of color communities (most often Black and Latino voters) for why these propositions passed and, more importantly, the failures of the organizers and their tactics.

While I can empathize with the pain that rises from losing [badly] in an election year that, in the same moment, ushered in a progressive sounding, bi-racial man to the first office of this nation, I cringe at the inability of the planners and the funders of the "Gay Marriage" movement to help mobilize their base to a broader understanding of their losses.

The unabated rise in racist rhetoric that I have been reading endlessly on blog posts of many (mostly Gay White male) bloggers, and Facebook notes and posts, thoroughly disturbs me. It serves to reiterate how the designers and the organizers of the "Gay Marriage" movement failed to understand the complex ways in which electoral politics in the US has been shifting, responding to large changes in the demographics of the US. States such as California, Florida and Arizona, that have seen a massive increase in the immigrant and people of color populations.

According to the U.S. Census, in 2006 about 35% of the California population were reported to be persons of Hispanic or Latino origin, 12.4% of Asian origin, 6.7% reported to be of black or African origin and 2.4% reported be of two or more races. This is a seismic shift from the late eighties and early 90's. A report from the California Governor's Office indicates increases in every ethnic group between 1990 and 2000, except a  sharp 9% drop in the White Non-Hispanic population.

In Arizona the Hispanic population grew by a whopping 80% between 1990 and 2000 and now accounts for fully one quarter of Arizona's 5.1 million people. While in Florida, the Hispanic population went from 12.8% in 1990 to an estimated 20.8% in 2008, and the Black population from 13.7% to that of an estimated 16.6% for the same time period. These shifts in racial and ethnic make-up of these key states have produced very different kinds of voters over a period of time. A larger number of naturalized citizens and children of immigrants, and a more organized Black/African-American voters are now up for grabs by both the conservative and liberal parties and issues.

The "Conservative Evangelical Right", has historically deployed a range of  "wedge issues" such as restricting women's access to birth control mechanisms, restricting the ability of undocumented immigrants to access health care and Gay marriage, to build a diverse popular base. In the late 80's and early 90's, responding to the fear of the "browning of the U.S.," several nativist groups, funded by large right-wing foundations like the Olin Foundation, launched several anti-immigrant ballots. Prominent among them was the passage of Proposition 187 in California (which was ultimately nullified by the California Supreme Court), and paved the way for Republicans to introduce a range of odious bills in the U.S. Congress that sought to restrict the rights of immigrants (both documented and undocumented) to access public benefits. The majority of these bills were lumped into the Welfare Reform and Immigration Reform Bills and passed.

The Right Wing, having built its base began to realize that with shifting demographics of key states like California, Florida and Arizona (the laboratory of border wars), they needed to build a base in the growing ethnic/immigrant community organizations and places of worship. The funders of Right Wing strategies sought out local outfits of the Conservative Family Research Council to mobilize ethnic organizations and churches along the lines of "traditional family values," something they knew would float well among communities ravaged by economic and educational disparities, desperately trying to hold on to their families of origin as their sole source of comfort.

The strategy paid off on two levels: 1.) it helped them to mask the economic agenda of their funders, which includes privatization of essential services and reduction of the care-giving functions of the state, and 2.) it helped to keep ethnic and immigrant communities fighting with communities fighting on other progressive issues such as pro-choice and sexual freedom. All tolled, the Right Wing gained from maintaining its hold over U.S. citizen populations (largely white and African-American) by pandering to their "nativist" sentiment, and taking a marked leap over its appeal to newly emerging ethnic/ immigrant communities.

Given the complex electoral strategy of the Right Wing, those of us who find ourselves on the left-progressive side of issues, ranging from health-care-taxes and state control over people's bodies, need to develop a sharper, more broader base, along with a newer array of organizing strategies. As a Queer, South-Asian, immigrant my destiny lies in the betterment of these communities. I cannot afford the luxury of heaping racist comments on my fellow people of color and immigrants, when they have been historically fucked over by largely White power-holding communities. Neither can I afford to separate myself from my Queer community (no matter how angry I get with them). My organizing is, therefore, complex, nuanced and sometimes at the messy crossroads that many communication strategies of national LGBT organizations do not address.

In my opinion the "Gay Marriage" movement, by choosing to locate its rhetoric and organizing within the individual's Right to Marry, has failed to mobilize a larger base, especially within people of color and ethnic/immigrant communities. The history of liberation and achievement of rights by people of color and the continuing struggles of immigrants, is a story of communal liberation. We did not struggle on the basis of individual rights; we struggled for and continue to fight for community rights. One might say that "Gay Marriage" is also about the rights of the Gay and Lesbian community, to which I assert, is still ideologically rooted in notions of "individualism." It is a notion deeply rooted in neo-liberal ideologies. A neo-liberal social ideology converts every individual into their own actualizing project, almost to the point of separating individuals from their communities. Under this regime, individuals, by becoming efficient risk managers of their own life, can take charge of their life, and live happily in a privatized, nuclear family. This privatized, nuclear family performs the essential care-giving functions of the state, and absorbs the financial and emotional losses.

Such notions of privatizing state's care giving functions and isolating the individual to become a self actualizing project is something I see a lot in the rhetoric of the "Gay Marriage" movement. Their appeal is to protect a very individualized Queer love. Quite frankly, it does nothing to question the location of the dividing line for deserving state's attention between the married vs un-married. I would bet you, if we broadened our debate to the rights of diverse kinds of families (e.g. extended families, adult siblings sharing a household, aging seniors sharing a household, multi-generational households) to access state benefits and protections, that would fly very well with immigrant and people of color communities. And our communities are filled with such families! We would also be able to move away from framing the debate as "sanctity of marriage" (a Right Wing dream come true!) to a more broader economic argument of reinstating and broadening the care-giving functions of the state.

Much of my post might seem to be the rantings of an armchair graduate student! But it is largely based on over 10 years of organizing within domestic violence movements, HIV/AIDS, immigrant rights, Queer people of color and mainstream LGBT movements.

As an immigrant rights organizer, when I sought out the solidarity of LGBT National and State Level organizations, the response I received was nothing short of pitiful! My numerous presentations on the issues of LGBT immigrants, the growth of immigrant populations in many states, and the subsequent need to work with LGBT immigrants at the state level, fell FLAT! The only issue related to immigration that got some attention was the rights of LGBT U.S. citizens to sponsor their immigrant romantic partners. As if, the rights of all the other immigrants could just fall off the road to liberation.

Instead of heaping allegations of "nativism and xenophobia" on them, I chose to look for the few, possible allies; interestingly they all came from LGBT anti-violence programs, Trans-gender and LGBT labor organizations and most equivocally from LGBT of color organizations. Signalling to me the sheer lack of imagination within the LGBT mainstream national organizations, that were and still are so busy with their narrow "Gay Marriage" agenda.

I have news for these  national organizations! As long as you keep trekking this narrow, individualist road you will continue to be defeated!

(Image from Amigas Latinas, in Chicago)

2 thoughts on “Of Shifting Electorates and Failed Strategies for LGBT Equality; the dissonance between People (both queer and straight) of Color communities and the Gay Marriage Movement!”