It's gratifying to see a scientific journal with the intellectual heft of The Lancet taking on the pope and his recent idiotic rantings in Africa and how condoms "contribute to HIV/AIDS": 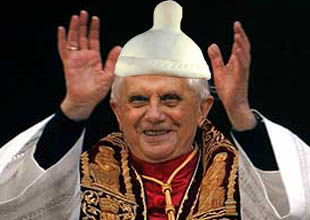 "Whether the Pope's error was due to ignorance or a deliberate attempt to manipulate science to support Catholic ideology is unclear. But the comment still stands and the Vatican's attempts to tweak the Pope's words, further tampering with the truth, is not the way forward. When any influential person, be it a religious or political leader, makes a false scientific statement that could be devastating to the health of millions of people, they should retract or correct the public record. Anything less from Pope Benedict would be an immense disservice to the public and health advocates, including many thousands of Catholics, who work tirelessly to try and prevent the spread of HIV/AIDS worldwide."

But they're being nice. Or tactful. Or something. I'm sorry, but is it really "unclear" if his intent was to manipulate science to support Catholic ideology? Really? Unclear to whom?

Note to Galileo: About 1.7 million people, mostly women, in sub-Saharan Africa became infected with the HIV virus in 2007, bringing the total number of infections in the region to 22.5 million, according to the latest report by UNAIDS, the United Nations program that deals with HIV/AIDS. That’s two-thirds of the global number of people living with the virus.

The pope's comments are nothing short of an outrage, and frankly are as much a "crime against humanity" as any genocide. Medieval rot.

Of course, it wouldn't be the first time…and the Vatican's record on astronomy would be enough to give anyone pause when it came to listening to papal science (which, interestingly, if you Google "papal science" the first thing that comes up is Paypal. Somehow perfect.)

"Papal science"…Is that an oxymoron? Or just a moronic?