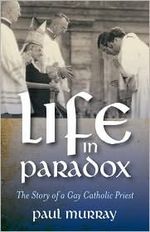 Paul Murray was the first openly Gay priest in the Washington, D.C. Roman Catholic Archdiocese; he worked in a ministry to troubled homosexuals called Among Friends. He is now Catholic Chaplain and teacher at Bard College, Annadale-on-the-Hudson, in the Catskills north of New York City, still a priest, still openly Gay.

The autobiography, Life in Paradox, recounts the long journey he took from a conservative Episcopalian youth to the Catholic Church to the priesthood to Gay identity to battles with several layers of the Church hierarchy over his personal life, but more particularly over his ministry to Gay people, to final resolution—and success.

The book reads more like a novel than an autobiography; there is a kind of plot structure in it that most lives don’t contain. He set out on a quest — to be a good, religious human being; encountered obstacles, trials, and ordeals along the way; finally came to confront his religious superiors directly and did not back down or recant — even when threatened with trial for heresy; achieved his goal of personal integrity — as a Gay man and as a priest; and now bestows boons to his students.

And the story is amazingly detailed. Murray presents whole swathes of his life verbatim. This assists with the novelistic read of the book, though it is also a weakness because a lot of the details are more annoying to the reader than germane to the plot. He lived for a while as a resident in a small parish, for example, run by a pastor who did not like him and acted rude and insensitively toward him. As a reader and outside observer of his life, I kept wondering how he could put up with it. Why didn’t he leave?

Of course, THAT is precisely the message of the book: he didn’t leave because he really was a good priest and wanted to practice Catholic priesthood the right way. And it resulted in one ordeal after another.

Murray deals with his homosexuality rather matter-of-factly; it is simply part of who he is as a priest who is a homosexual. He does not tell much about his interior life. This book is about the Church, not about the spiritual struggle — or victory — in finding spiritual meaning in Gay identity.

The book ends wonderfully with a kind of priestly spiritual experience. As a priest ministering to the dying, he is called to give Last Rites to a young man dying of AIDS. There is such a sweetness in the way this story is told — and gentle humor. It is in the words of the young PWA questioning what he believes and what he has come to understand about faith that Paul Murray seems to present what he has learned. They joke together about reincarnation and afterlife and about the meaning of the sacraments. It’s the PWA, speaking almost with the voice of Christ, who affirms Paul Murray’s priesthood, inviting him as minister to join in the celebration of his life in the form of the consecrated wafer, washed down with a sip of lemonade. The episode offers a glimpse into the power that priesthood can muster, even without all the issues about Truth and Dogma and Church authority. It comes down to being a good human being with another good human being.

The book’s an easy, entertaining, interesting read — especially for Catholics, priests and former priests/seminarians who can appreciate the Byzantine ways of the Church hierarchy. It doesn’t give an answer to troubled souls about the meaning of life, though to Gay Catholics and Gay priests struggling to remain in the Church with their integrity intact, it offers a good role model in the life of a man who has achieved just that.

Toby Johnson is the former publisher of White Crane (White Crane Journal).  He is a frequent contributor to White Crane.  For more information visit www.tobyjohnson.com

Subscribe today and keep the conversation going!  Consider giving a gift subscription to your friends who could use some wisdom!  This is anIf there's an article listed above that was not excerpted online, copies of this issue are available for purchase.  Contact us at editors@gaywisdom.org