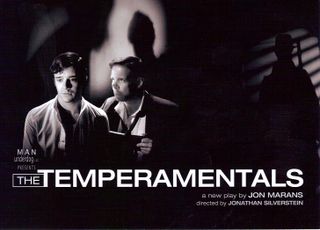 Sometimes I wish I owned a plane so I could get to all the good things that are happening in different cities. Just this last weekend, my old Circle of Loving Companions attended a performance of The Temperamentals, John Marans' exciting telling of the beginning of the GLBT civil rights movement in the lives of Harry Hay and his passionate lover and cohort, designer Rudy Gernreich as they created The Mattachine Society in Los Angeles (yes…L.A. folks…the real birthplace of the modern day GLBT civil rights movement, not New York).

Alas, I think the show is sold out at the Barrow Group TBG Studio Theater on 36th Street. We should all have such problems. It doesn't help, of course, that Michael Urie has, since the last time he performed in this play, gone and made himself a television star on Ugly Betty. Let's just say it was a lot easier to get tickets a few years ago when they did this play in a storefront in Williamsburg. Urie is fabulous as the Viennese Gernreich and Thomas Jay Ryan is downright spooky as he captures the young Harry. Call the theater…demand an extended run. Hello?…HBO!? …can you say "docudrama"?

Then…hopping on the old Gulfstream, we'll dash out to the aforementioned Los Angeles, and catch the lovely, the talented, the shit-stirrer Tim Miller's Lay of The Land

at The Highways Performance Space in Santa Monica. Miller, one of the NEA Four, an award-winning, performance artist (and White Crane contributor) never disappoints, and Lay of The Land is no exception. According to the press release: "Miller's saucy, sharp-knifed look at the State of America during a time of trial careens from his sexy misadventures performing in 45 States, to his take on No on Prop 8 street actions, to jury duty anxiety, choking on cheap meat caught in his 10 year old Gay boy's throat (try parsing that sentence…I really don't understand what that means), Lay of The Land gets at that feeling of gay folks being perpetually on trial, on the ballot, and on the menu! (See what having a sliver of a majority in your state invalidating 18,000 gay people's marriages will do!) Wooo Hooo!

Miller, fearless as ever, makes a fierce and funny examination of who eats and who gets eaten. Framed by the No on Prop 8 protest in downtown L.A., Miller makes pit stops as Abraham and his Gay son Isaac spread out on a L.A. 70's suburban Formica kitchen, the Stanley Mosk Courthouse explodes in pink jury summons that call queer identity to judgement, Miller is on his home turf here in SoCal, so he's gonna be fierce as ever.

Lay of The Land is a "lay" in all kinds of ways: a sex-assignation, a queer topography, and of course a narrative ballad with a recurrent refrain! (Miller's favorite way-down-the-list definition for "lay"!) Tim is only there this weekend (5/16 and 5/17) and next (5/22 and 5/23). Be the first on your block!