Last year, after the election of Barack Obama (whom I supported), I predicted that Obama “is likely to disappoint us the way that Jimmy Carter and Bill Clinton did before.” This was not meant as an indictment of Obama but as a reality check: Presidents inevitably disappoint those who voted for them, if only because, as President of the United States, they have to serve everyone and not just their supporters.
It is barely six months after Obama’s inauguration, and disappointment has set in. Big time. Though Lesbians, Gay men, bisexuals and transgender people are not the only ones who the president has disillusioned – antiwar activists and civil libertarians also feel betrayed – we are the ones who seem to be making the most noise lately. In fact, the chorus of queer Obama critics has grown to encompass a “who’s who” of the GLBT community: John Aravoris, Wayne Besen, David Ehrenstein, Kate Kendell, Geoff Kers, David Mixner, Dan Savage, Michelangelo Signorile, Richard Socarides, Andrew Sullivan….
If nothing else, the Obama administration has united us.

What has Obama done for us lately? He has appointed out Lesbians and Gay men to various government positions, most prominently John Berry as Director of the Office of Personnel Management. And he signed a proclamation declaring the month of June to be LGBT Pride Month. Meanwhile, Obama asked the homophobic Rev. Rick Warren to give the invocation at his inauguration; failed to fulfill his promise to repeal “Don’t Ask. Don’t Tell” and the Defense Of Marriage Act (DOMA); has allowed the military to continue its routine discharge of open or outed service members; has failed to lift the ban on HIV-positive visitors or immigrants (which Congress authorized him to do); and did nothing to push the equally do-nothing, Democratic Congress to pass the Employment Non-Discrimination Act (ENDA) or the hate crimes bill. And, adding insult to injury, Obama’s Justice Department recently went to court to actually defend DOMA, using language that one would expect from the George W. Bush administration.
In all fairness, Obama and his administration probably mean well. And they certainly have a lot on their plate: the economy, wars in Iraq and Afghanistan, North Korea, health care, energy, the environment . . ..  Even with all his faults, the president is a vast improvement over his predecessor. He certainly did not expect the barrage of criticism that was hurled at him by an outraged GLBT community. As if the verbal assaults did not get the message across, the decision by wealthy gays not to support a recent Democratic National Committee fundraiser certainly did. (Nothing speaks louder to politicians than money, or the lack thereof.) John Berry did not help matters any when he told The Advocate that Obama plans to fulfill his promises “before the sun sets on this administration.”
The president was quick to react to this unexpected wave of attacks. He signed a presidential memorandum that extended some benefits to the same-sex partners of federal employees, though not health care benefits (because of DOMA). His administration, on behalf of the federal government, apologized to Dr. Frank Kameny for firing him in 1957. More tellingly, the administration decided not to appeal a ruling that awarded $500,000 to a Library of Congress employee who lost her job when she transitioned from male to female.
Finally, Obama invited GLBT community leaders to attended a White House reception to observe the 40th Anniversary of the Stonewall Riots. About 300 big shots attended the reception, while an undetermined number (who I presume include some of Obama’s noisiest critics) rejected their invites. At the reception, the president showered his famous charm upon the assembly, asking them to be patient, restating his support for GLBT rights and promising to work to abolish both “Don’t Ask, Don’t Tell” and DOMA and to push for passage of ENDA, the hate crimes bill and the Domestic Partner Benefits & Obligations Act. 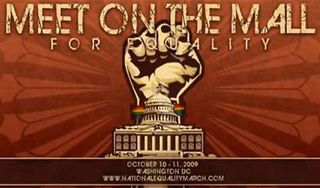 Obama’s critics were not satisfied. In fact, Obama’s gestures (or lack thereof) only encouraged activists who are pushing for a fifth GLBT March on Washington. (The first four were held in 1979, 1987, 1993 and 2000.)  Cleve Jones, best known as an associate of the late Harvey Milk and the creator of the AIDS Quilt, called for a March to be held on October 11, National Coming Out Day and the 30th Anniversary of the original March. “We seek nothing more and nothing less than equal protection in all matters governed by civil law in all 50 states,” Jones said. At least, a March will give us the opportunity to tell Obama what we think of him as we walk past the White House.
I first met Cleve Jones in 1980, when he was the Grand Marshall (with Barbara Grier) of Miami’s Gay Pride March, and I have long admired his work as a gay and AIDS activist. I attended Marches on Washington in 1979, 1987 and 1993; where I met lots of people and had a great time. Sadly, in my opinion, marches on Washington do not accomplish much, other than allowing us to network, express ourselves and, of course, party hearty. We have a lot of work cut out for us, but it is mostly on the state and local levels. Though we must continue to keep the Obama Administration's collective feet to the fire, the current political and economic climates are not right for a nationwide protest. (I certainly can’t afford to fly to D.C. at this time and neither can many others.) Of course, I could be wrong, and I invite you to write me a note and try to convince me otherwise.
Jesse Monteagudo is a regular contributor to GayWisdom.org and a South Florida-based freelance writer and activist. Write him at jessemonteagudo@aol.com.

2 thoughts on “Obama and the GLBT Community: A Reason to March?”