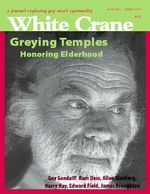 Gandalf the Gay
By Josh Adler

For
our 20th Anniversary Issue we've decided to to share from the treasures of our past, by choosing a number of pieces from our 80
issues.  This piece was
originally published in Issue #60 of White Crane (Spring 2004)

My 16 year-old brother Chad is a Lord of the Rings junkie, and during my most recent visit home to Virginia, he insisted on screening the trilogy’s first two extended DVDs before venturing to the multiplex to see the final installation of the Oscar-winning epic. There is an inherent heterosexual maleness that dominates the landscape of Peter Jackson’s faithful adaptation, and cults of ardent straight boys not only flock to the theater for multiple viewings but desperately try to convert their Gay brothers into similarly zealous devotees. It’s hard for me to tell Chad that I’d much rather see Robert Altman’s new film about Joffrey ballerinas than sit through another four hours of warfare on Middle Earth, so with feigned enthusiasm I agreed to oblige him for this brother-bonding experience.

The Good Wizard Gandalf appeared onscreen early into The Return of the King, and Chad did something that startled me. In the crowded theater, he leaned over our enormous tub of popcorn and whispered into my ear, “Is Ian McKellan really Gay?”

Let me preface my response with a little history. I came out to Chad last summer, shortly after his sixteenth birthday. Not only did he tell me that he disagreed with my lifestyle, but he said, “I really wish that you never told me this. Honestly, I’d rather not know.”

His reaction was hurtful and condemning, but as his older brother I tried to see beyond his words and examine the situation from his perspective. Just as accepting one’s sexuality is a unique process for Gay men, a straight teenager coming to terms with a gay sibling or loved one is equally challenging. Less than six months later, Chad felt comfortable asking me openly about Ian McKellan’s sexual preference; I took this as a positive sign that he is growing into his acceptance and understanding.

“Yeah,” I whispered back, a bit surprised that we were having a discussion about Gay celebrities in the Hampton AMC 24. “Actually, he is one of the few out-gay actors in Hollywood.”

“Wow,” Chad replied, nodding his head and sitting back in his seat to watch Gandalf the Gay gallop on a white horse on his quest to defeat the forces of darkness and save the human race from oppression and fear.

Like the benign Hobbits of J.R.R. Tolkien’s fantasy, Chad reveres the Good Wizard Gandalf in the same way that a Catholic respects his parish priest, a Boy Scout looks up to his Scoutmaster or an American patriot admires his President. Gandalf is an Elder, a wise man who possesses both worldly and spiritual leadership qualities and assumes a position of greatness in the eyes of the younger and less experienced community. Even before Jackson decided to make his film, the character of Gandalf has been deified by legions of Tolkien readers who see him as a God-like elder capable of transforming the world into a better place.

Similarly, the actor playing Gandalf is a kind of Elder for me and many other gay men, actors and non-actors, who see his willingness to play heroic roles in mainstream films as something of great value to our community. We all know that there are probably other Hollywood action heroes who remain closeted in order to appease the dominant heterosexual paradigm. Sir Ian owns his homosexuality on the Fellowship of the Rings DVD documentary, and he feels free to kiss his partner openly in front of TV cameras at prestigious award ceremonies. He doesn’t pretend to be something he’s not simply to get cast in macho roles or receive huge contracts.

Not only is Sir Ian one of the few gay men in Hollywood to embrace his homosexuality, but this 64 year-old Elder is also an activist in the gay community in the United Kingdom. He is a founder and active member of the Stonewall Group U.K., an organization that works to further legal rights for lesbians and gays in England. In 1988 he came out publicly on the BBC Radio 4 program by denouncing Margaret Thatcher’s “Section 28” proposal which aimed to criminalize the “public promotion of homosexuality.” Since then, his activist stance on political issues has empowered the gay community in the U.K. and abroad.

An Elder sets positive examples for the younger generation and instills a sense of optimism and forward thinking in peoples’ lives. Sir Ian, knighted by the Queen in 1990, appears in both mainstream movies (X-Men and X2 and the Rings trilogy) as well as many independent art-house films, many of which have gay themes (Gods and Monsters and Bent). He has also appeared in a music video for the Pet Shop Boys. His career has taken off since his coming out in the late 80s, and he jokingly mentions wanting to go back in the closet so he can live a simple and quiet life again. “I am going back in the closet. But I can’t get back into the closet, because it’s absolutely jam-packed full of other actors.”

In addition to his activism, Sir Ian possesses a kind of passion for life and a positive outlook on the world around him. This is evident in the journals that he kept during the entire filming process of Lord of the Rings. He has aptly titled his journals The Grey Book and The White Book after Gandalf’s transformation in the trilogy, and they can be accessed online at his website. Many entries talk about his joyful attachment to the project and his admiration for Peter Jackson and the unique vision he brought to the film. Sir Ian’s journals also contain photographs of him enjoying the natural beauty of New Zealand and communing with his cast mates. In one entry he talks about “finding Gandalf in himself” and in another he refers to the “Gandalf twinkle,” the magic spark that makes this mystical leader so adored by the Hobbits.

Ian McKellan is a Gay Elder not only because of his leadership and activism, but because he continues to project a sense of confidence and awareness despite elements of homophobia and hatred directed toward him. Many Lord of the Rings chat rooms on the Internet include anti-Gay postings by fans of the film who somehow can’t fathom a Gay Gandalf. In fact, a Google search of “Gay Gandalf” yields over 30,000 sites, many of which include disparaging remarks about McKellan’s sexuality. McKellan has not tried to hide from this bigotry by ignoring his Gay identity; rather, he has remained publicly proud and assured in the face of discrimination.

The gorgeous conclusion to The Return of the King makes the entire trilogy worthwhile. Frodo destroys the Ring, the fighting ends and the Hobbits return peacefully to their bucolic home where they are warmly embraced by their community. The film also becomes extremely gay, in that it is unafraid to show men kissing, embracing, crying and literally carrying each other on their backs. When tears started to run down my cheeks, my brother Chad gave me a little nudge.

“Stop crying, Josh,” he said, embarrassed that his queer brother was daring to exhibit emotion in public. I nudged him back, lovingly.

“There’s nothing wrong with tears,” I said to him, blurry-eyed. He nodded, the same nod he gave me three hours prior when he accepted Gandalf’s sexuality. These are baby steps, but my brother is slowly growing into an understanding of the Gay Soul. I look forward to the day that he’ll revere me as an Elder, an older presence who offers him a new perspective on the world.

Josh Adler is a writer and director who lives in Manhattan. At the time of this writing he was working on his Master’s in Educational Theatre at New York University.