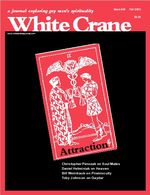 For
our 20th Anniversary Issue we've decided to to share from the treasures of our past, by choosing a number of pieces from our 80
issues. This piece was originally published in Issue #58 of White Crane (Fall 2003)

The fact we share viewpoints, hold common opinions, and understand each other’s humor is evidence of a gay cultural consciousness. Central to this consciousness are an openness to experience, a quest for adventure, and a flare for the unusual and the queer. But the details are less important than this sense of shared consciousness, the feeling that there’s a mystical, “karmic” link connecting us.

As we’re growing up, we train ourselves to have what society calls “women’s intuition,” that is, a sense of knowing things about the world and about other people. We often feel we need this kind of “second sight” in order to protect ourselves and our secret, even if as youngsters we don’t quite know what the “secret” is. We likely find the idea of women’s intuition appealing. We allow ourselves to experience this because we’re not bound by gender roles like straight men. Real men, after all, don’t have hunches. Men are supposed to “know” not to “have feelings” about things.

The most common manifestation of gay intuition is the phenomenon of gaydar. Of course, a lot of the talk about this is whimsical. It’s a way to intimidate straight men by suggesting we can somehow “see” their sexual secrets. It’s a way to dramatize our brotherhood by declaring we know the truth about each other. In some respects, gaydar is just projection and wishful thinking. Gay men see men they’re attracted to and project mutual desire onto them. We see beauty, want it to be our beauty, and interpret it as a sign of shared homosexuality. But it’s not always imaginary; most of the time, we’re right.

Though gaydar is a frivolous notion, it absolutely dominates our lives. We spend far more time trying to figure out who else is gay around us than we actually spend having sex. Gaydar is the main way we experience our homosexuality moment by moment.

Gaydar seems to demonstrate two things. First, it suggests there is something so basic to homosexuality that it alters physical appearance; we’re recognizable to people who know what to look for. This is certainly antithetical to the notion that homosexuality is a choice, for choices people make (like to be Catholic or to eat meat or not to own a television set) don’t show in their visage. That we look gay (like people look male or female or look Negroid or Caucasoid) suggests it’s something physical, natural–and very real.
Second, gaydar indicates the existence of something “supernatural,” something like telepathy or clairvoyance. It is like reading other people’s aura and discerning things about them that exist in their soul. Perhaps it demonstrates “karmic patterns,” spiritual links between people. Our experience of gaydar shows us that people give off vibes, that we live in an environment of mind as well as of space.

All people receive vibes from other people (though not all people allow themselves to be aware of them). This isn’t special to us as gay.

But we learn to be especially attuned to the vibes people put out. We get lots of practice. We look for other gay people in our surroundings — to cruise, to seek beauty to gaze upon delectably, and to gauge the degree of our personal safety. We learn to read people’s vibes to know whom we can come out to, whom we should avoid, for whom we should affect a straight, non-threatening persona and whom we should invite for sex.

The presence of an undetectable invader–like HIV or the panoply of STDs–in gay sexual space confounds this gay intuition of safety and danger. There has been such turmoil about things like safe sex training, disclosure of HIV status, “barebacking,” and such a rift between positive and negative men, perhaps, because of the “jamming” to our gaydar.

We seek affirmation in the vibes of homosexuals of the past; we like the idea that famous men and women of history were gay. And we delight in knowing something intimate about them that other–straight–people don’t know. We sometimes feel a curious pleasure when we tell straight people—who are often shocked—just which famous actors, writers, or historical figures were homosexual, as though we ourselves can thereby bask in their importance and legitimacy.

Finding other attractive gay people who resonate with trust-affirming gay vibes creates a sense of a magical world around us. Gay space is safe space, secret space, sacred space. Discovering our own homosexuality imbues the world with secrecy and magicalness.

We learn to look for signs: a hairpin dropped by another gay man to confirm our gaydar, synchronicities and coincidences, epiphanies from God. All these things tell us it’s really OK to be gay and that we are beneficiaries of a special vocation that other people don’t get.

The lives of those who’ve lived before us impart vibes that we pick up from the environment around us. This is the psychological ecology in which each of us lives and finds his place in the scheme of things. We figure out who we are by examining the things that interest us and carry meaning, the vibes we resonate with.

Our homosexuality is bigger than we are; it transcends our individual existence. It is a reality we participate in, a quality of God manifesting itself in the world. Studying our experience of homosexuality reveals why we’re here at this particular moment in history and how playing these particular roles serves the evolution of consciousness.

Maybe the phenomenon that we call by the cutesy term gaydar is the real “cause” of homosexuality. It’s not that gayness is caused by biology or genetics or conditioning–all things that have to do with personhood and individuality. Maybe it’s that gayness is karmic and spiritual. After all, that’s what we mean when we throw up our hands at all the scientific, psychological, and political wrangling about the causes of homosexuality and say, “It’s just how God made me.” Maybe the “reason” we’re gay is that we’re resonating to gay intuition, vibrating along the gay dimensions of the spirit field. Maybe these vibes come from the World Mind, Gaia, or planetary homeostasis telling the human race it’s time to adjust population imperatives to the reality of life on an overcrowded, resource-exhausted planet.

That people give off vibes is a major insight into the nature of consciousness and that whole realm of phenomena called the supernatural which is the content of religion. It explains phenomena like ghosts and haunting; prophecy and clairvoyance, apparitions and miraculous healings; the power of prayer; afterlife, reincarnation and karma; mystical experience and the sacredness of places and events; the dispersion of myths and legends around the world; synchronicity, signs from God, bizarre and wondrous coincidences; fads and pop crazes; even UFOs and alien abductions–all the issues of religion, the paranormal and the supernatural.

For what we all actually are is, in Herman Hesse’s words from the Prologue to Demian, “the always significant and remarkable point at which the world’s phenomena intersect.” We are the intersection of genetic, historical, geographical, political, cultural, and karmic patterns. How these patterns intersect–from our DNA to the karmic vibes we resonate with–determines our particular perspective on the greater reality. That variously individuated perspective gives rise to our individual egos. And the “greater reality” is metaphorized as the Mind of God.

The major content of gay intuition is the sense of being part of a specific group and being a specific kind of person. It takes some effort to accept this intuition, but once you’ve done it everything else makes sense. You see there’s a secret homosexual slant to almost everything and you see you’re one of the people with the homosexual slant because you can recognize it. And that’s the point. You see things about life and love, religion and God that other people don’t see precisely because of your gay perspective.

Excerpted from Toby Johnson’s book Gay Perspective: Things Our Homosexuality Tells Us about the Nature of God and the Universe.