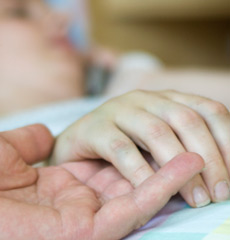 Every day, same-sex couples must fight for the basic rights that
straight
married couples take for granted.  One of those basic rights is the
right
to visit your partner in the hospital.  Michael and I are fortunate to
live
in Broward County, a progressive county in the mostly conservative state
of
Florida. Broward has a Domestic Partners ordinance which, among other
things, guarantees the right of domestic partners to visit their loved
ones in
the hospital.During the last year, Michael and I had to be
hospitalized
in separate occasions: Michael in the Cleveland Clinic in March and I in
Broward
General in June. (Happily, neither hospital visit lasted for more than a

day or so.) In either case, our partner was allowed unlimited access
into
the hospital’s emergency room to be with our loved one.

Unfortunately, other couples were not so fortunate. During the
height of
the AIDS epidemic, too many men were forcibly kept away
from
their dying lovers by hospitals and hospices who did not recognize their

Florida vacation. When Pond was rushed to Jackson Memorial Hospital in
Miami, Langbehn and her children were denied access to Pond because (in
the
hospital’s opinion) she wasn’t a “real” family member. As a result,
Pond
died alone, in spite of the fact that she and Langbehn had living wills,

advanced directives and power-of-attorney documents. This didn’t
matter,
according to a heartless hospital worker, who allegedly told Langbehn
that she
was in an “antigay city and state.” (This might be true of the State of

Florida, but not of the City of Miami.) Langbehn, not surprisingly,
sued
the hospital.

Obviously an incident like this one does nothing for Jackson’s
reputation,
especially when one considers the hospital’s current financial
problems. To their credit, officials from the Jackson Health System (JHS) dealt
with the
resulting brouhaha by meeting with a coalition of local LGBT
organizations,
including SAVE Dade (Safeguarding American Values for Everyone), to
solve this
pressing (and embarrassing) issue. The end result of these
negotiations,
announced on April 12, was a change of policy for JHS that gave the
same-sex
partners of lesbian, bisexual and gay patients the same visiting rights
as
heterosexual spouses.  Jackson redefined its definition of “family” to
include people who are not legally related to the patient, including
“spouses,
domestic partners and both different-sex and same-sex significant
others.”
Meanwhile, “while this is a positive step for the LGBT community in
South
Florida, the work to implement fair visitation policies throughout the
rest of
South Florida and across the state is far from over,” announced SAVE
Dade.

Coincidentally, on April 15th President Barack Obama, who’s having
his own
problems with his LGBT constituents, issued a memorandum that calls for
an end
to discriminatory policies that limit hospital visitation to legal
spouses and
immediate family members.  The president directed Health and Human
Services
Secretary Kathleen Sebelius to “ensure” that hospitals that participate
in
Medicare and Medicaid (that is, most hospitals) “respect the rights of
patients
to designate visitors” and allow those visitors the same privileges that
married
spouses and legitimate children take for granted. The memo makes no
mention of assisted living facilities.) Obama then called Janice
Langbehn,
to express his sympathy and apologize for the injustice done to her and
her dead
partner. “I hope that taking these steps makes sure that no family every
has to
experience the nightmare that my family has gone though,” she replied. 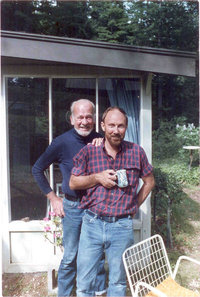 Unfortunately, the fight is far from over. Two years ago Clay
Greene
and Harold Scull (at the left), an elderly couple living in “liberal” Sonoma County,
California, were forcibly separated when Scull fell and became
incapacitated. Though the couple had provided for such an emergency,
the
County refused to recognize their relationship. It got a judge to
declare
Greene – who had allegedly acted violently against Scull – mentally
incompetent,
placed both men in separate facilities, gained the power of
conservatorship from
a sympathetic judge, and then proceeded to take over, sell or keep the
couple’s
belongings.  Through it all, Greene was not allowed to visit Scull, who
died in August 2008. Needless to say, Greene is now suing the
County.
Cases like this remind us that we must keep vigilant and
ever-active in our
struggle for the rights of same-sex couples. Horror stories like these
will not cease until and unless lesbian and gay couples achieve the same
rights
that straight married couples now have, whether in Florida, California,
or
across these United States.
Jesse Monteagudo (jesssemonteagudo@aol.com)
is a
freelance writer and regular contributor.