So a closeted Gay kid growing up in Caracas, Managua or Corpus Christi, Texas, just got another model for living his life openly. That model is Ricky Martin. And unlike the hundreds highlighted by our global media, Martin shares a language and culture with that closeted Gay kid. 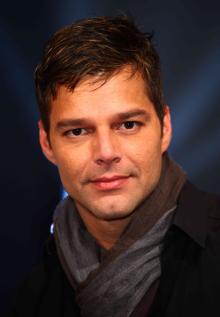 Ricky Martin has come out of the closet and a lot of the commentary around the internet and blogosphere mirrored that of Nathan Lane's anti-climactic coming out years ago.  I recall a comedian at that time commenting that Lane's disclosure amounted to "tea leaves" that did not need to be read.  Certainly Lane, already known for playing flamboyantly Gay characters, didn't surprise many.  But we brush these statements aside at our peril: the peril of hardening ourselves to jade.  In Lane's case it was a long path that included a mother who reportedly told him she preferred him dead than gay.  Lane came out when he could and that decision was his to make.  He hurt no one by his timing.  In Martin's case he has said he came out now because he has two kids and didn't want them to live with that kind of duplicity.  On a side note I'm struck at how Martin, like another prominent singer long-rumoured to be Gay, chose to be honest because of his kids.  I'm speaking of the American Idol contestant-singer Clay Aiken's who came out because he didn't want to lie to his children.  It's as if they reached a threshold where the containment units of the closet couldn't hold anymore.  I think we can all relate to that if we're honest.

But what many comments in the English language press (and internet) don't get is how much of a big deal Ricky Martin's coming out is for Latin America and for Latino GLBT people.  I can't think of a popular Latin-American entertainer with Martin's track record to come out of the closet like this.

Now that last statement might hit some people in the United States as funny.

I realize that in the United States' he's basically known for Menudo and Livin La Vida Loca. But consider for a moment that Ricky Martin has sold more than 60 million albums in his career.  Ponder that figure for a minute.  Those are albums.  Not singles.  That's more albums than Christina Aguilera's sold worldwide.  This isn't "Livin' La Vida Loca" one-hit wonder territory.  He's an enormous star in most other parts of the world.  In 1998 Martin was chosen to sing the anthem of the FIFA World Cup. That recording of "The Cup of Life"/"La Copa de la Vida" reached number one on the charts in 60 countries.  I bet you've never heard this song before.  Probably because the United States, not being a soccer-playing country, wasn't among those 60 countries.  But this is all to say that he was a huge star in Latin America and Europe before he appeared in the American consciousness and continues to be for rest of the world.

Some of the response to his coming out reveals the real ignorance on the part of many people in this country about Latino subjects or continents beyond Europe and the Northern half of North America.  And it's this lacuna of understanding by many in this country that reveals to me why his coming out is so important for Gay Latinos in this culture.  It provides one proud out Gay person of color for those of us who are not helped by a monoracial or monocultural understanding of what it means to be gay.  This paltry understanding was brought home for me a few days ago by a comment I read in response to Martin's coming out.  Something to effect that the story made him hear Lucille Ball's voice intone "Riiicky" from the old "I Love Lucy" show.  The "Ricky" in that case was the character of "Ricky Ricardo", played by Desi Arnaz.  Not surprising really because in my experience as a Gay Latino man, I can attest to the fact that for many non-Latino people, gay and straight a like, there are few Latinos in the popular consciousness.  If you're Cuban, your very existence evinces in word-association are to Ricky Ricardo/Desi Arnaz, or the Italian-American Al Pacino's Scarface impression.  It's pretty much the same for other Latino nationalities.  If you're Gay and Latino the circle pretty much shrinks to nothing.

A little side story to make my point:  When I came out of the closet in that far-ago time of the early 1990s, my mother struggled mightily with the announcement.  While she has come a long way and become supportive of me and my partner, at the time it was hard for her to come around to it.  Certainly there was the religious bias and misinformation.  But a big part of it was cultural.  I've written before about the feeling my mother had that my being "Gay" was some weird American thing.  Like a virus I'd picked up here.  I believe the turning point for her was coming to understand what my "being Gay" meant.  Which for her happened when she was able to connect my "being Gay" with the many Cuban intellectual and cultural figures she knew and loved.  People like Ernesto Lecuona and Lezama Lima.

Looking at the public impressions of out Gay culture at the time my mother could be forgiven for thinking that there were no Gay Latinos in existence.  I can only remember Pedro Zamora, the Latino character on MTV's The Real World who had HIV and became an AIDS educator.  The situation hasn't improved that much in the insuing years.  For someone of Ricky Martin's starpower to come out makes a difference for people trying to ground their understanding of what it means to be Gay in a Latino context.

I also love the fact that Ricky Martin came out of his own accord.  There was no George Michael-like tea-room sting, no spurned lover suing him for support.  Martin chose his own moment to speak his own truth.  He also wrote eloquently about his timing and his decision to be honest.  I'll let his own words speak for themselves:

"Today is my day, this is my time, and this is my moment. These years in silence and reflection made me stronger and reminded me that acceptance has to come from within and that this kind of truth gives me the power to conquer emotions I didn't even know existed … I am proud to say that I am a fortunate homosexual man. I am very blessed to be who I am,"

"Many people told me: 'Ricky it's not important,' 'it's not worth it,' 'all the years you've worked and everything you've built will collapse,' 'many people in the world are not ready to accept your truth, your reality, your nature.' Because all this advice came from people who I love dearly, I decided to move on with my life not sharing with the world my entire truth. Allowing myself to be seduced by fear and insecurity became a self-fulfilling prophecy of sabotage. Today I take full responsibility for my decisions and my actions,"

Know that these eloquent statements have been translated and read and talked about in Spanish throughout Latin America.  So a closeted Gay kid growing up in Caracas, Managua or Corpus Christi, Texas, just got another model for living his life openly.  That model is Ricky Martin.  And unlike the hundreds highlighted by our global media, Martin shares a language and culture with that closeted Gay kid.  Martin has created music that this closeted kid and his family have danced to for years.  Martin has been a source of pride for Latino people — you don't get the FIFA gig for being some washed up musician.   A lot of Gay Latino people just received a point of pride and identification of sorts.  May he emboldened more people to come out of the closet and live openly.  This is an incredibly important thing that has just happened.

One thought on “Why Ricky Martin Matters”