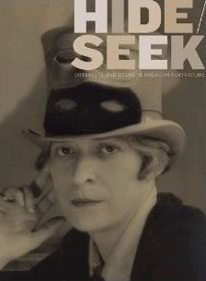 About a month ago I went and saw “Hide and Seek,” the Queer portraiture exhibit now at the National Portrait Gallery in Washington, DC. I had just started a long term on grand jury and regularly found myself in that part of the city when a member of the jury urged me to go. So one evening my partner and I joined a friend and took in the show before dinner.

What I saw stunned me.  We went from room to room and I found myself repeatedly goggled in disbelief that I was seeing what I was seeing. Many of the pieces I had heard of or seen over the years in textbooks or online. Many were by artists whose work I had always wanted to see and never had the chance before this show. Artists like AA Bronson and Felix Gonzalez-Torres, the Cuban-American artist whose portrait in this show is perhaps the most unconventional and most memorable. A small pile of beautifully wrapped candies against a corner weighing exactly 175 pounds – his partner's body weight at the time of his death. The artist requested that the viewer take and eat a piece to "participate" in the “wasting away” of his partner – a bittersweet evocation of the way that time fades on the tongue. As I went from artwork to artwork I felt as if I was participating in a sacred pilgrimage, witnessing the relics of masters and their attempts to put into visual form a lasting record of their lives, their loving, and their loved ones.

The well known artists are well represented: Andy Warhol, Annie Liebowitz, and Robert Mapplethorpe… the "usual suspects" you'd expect in an exhibition about Gay portraiture. Their place is certainly deserved. But this exhibition aims at more than mere predictability. It seeks to lay bare what has been long known but consigned to whisper. So there is work by Robert Rauschenberg, and his lovers Cy Twombly, and Jasper Johns. There are also canvases by Marsden Hartley and perhaps most daringly Grant Wood. Think about that for a minute. These are all artists largely understood by those in-the-know to have been Gay (or whatever term theorists want to apply to men-who-loved men back in the day). But their families and estates have stubbornly refused to acknowledge the fullness of their sexualities. This show does not hedge its bets. It seeks to lay bare the closer truths of these lives.

I was especially delighted by what I perceived as hidden, or perhaps just accidental, pairings. The aforementioned portraits of and by Hartley appear across the room from the works of Charles Demuth. Hartley and Demuth were contemporaries and colleagues and traveled in many of the same circles. They were also both Gay men. But they chose to live their lives in very different ways. Hartley was conflicted and embittered by his sexuality (his early letters and poems to Walt Whitman's executor and friend Horace Traubel reveal the young painter's awkward attempts to reconcile and find joy in his sexuality — sadly to no lasting avail). Demuth on the other hand was surprisingly "out" for his day and lived a productive life as an individual cherished by a wide circle of friends. Demuth is best known for his symbolic portraits (William Carlos Williams’ portrait as “I Saw the Figure Five in Gold”) and his precisionist floral watercolors.  But his luscious portraits of 1920s New York's gay bathhouses speak across the decades and are represented in this show. It was as if these two artists were “speaking” to one another across the hall and my mind began to spin. This exhibition continually had that effect on me.

And then there's the direct influence of poets in this exhibition. A handsome portrait photograph of Walt Whitman holds pride of place.  This is fitting since it was the curator David C. Ward's inclusion of a portrait of Whitman and his lover Peter Doyle that led to his meeting the Gay scholar Jonathan D. Katz.  Their collegial friendship led to this historic exhibit. But Whitman's work also pops up in David Hockney's "We Two Boys Together Clinging" on loan from a museum in England. The other poet whose life threads through the exhibit is Frank O'Hara. Not surprising since O'Hara was very much a part of New York's mid-century art scene as a curator at the Museum of Modern Art.  The Jasper Johns in this show is based on one of O'Hara's poems and O'Hara is physically embodied in four portraits here.

I could go on about this exhibition. But the important thing here is this: if you have even the faintest interest in this subject matter, you must see this exhibition. You should do whatever it takes to get on a plane, drive a car, or take a train to the nation's capitol and see this show. It is not hyperbole to state that this may be the most important Queer exhibition of the decade. This is our King Tut exhibit.  That is, perhaps a once-in-a-lifetime museum experience.  Why? Because it’s hard to imagine the stars aligning again anytime soon to have all of these works in one place.  The pieces are on loan from museums across the United States and Europe — itself a miracle of curatorial good-fortune.  For this brief window of time these portraits are here speaking to each other.  And they are here to speak to you.

As Gay people, this is our inheritance and a breathtaking exhibition of our stories. These are works of art by men and women who came before us and tried to make sense, in their way, of what it means to be men who love men and women who love women. And even all of that aside, the art itself is stunningly beautiful. That the Smithsonian has mounted this show is a feat that would be staggering and unprecedented for ANY arts institution in the country and they are to be applauded for their boldness and gutsyness.  Do not let this opportunity pass you by.  The show is on till mid-February.

Get off your asses and make it to this show. Trust me. This is one exhibition that will stay with you for a very long time.

UPDATE: as many of you know this exhibition is now getting media attention because right-wing religious fundamentalists and many Republican elected officials are outraged about the content and want the show shut down.  Even more reason to go see this exhibition as soon as you can.