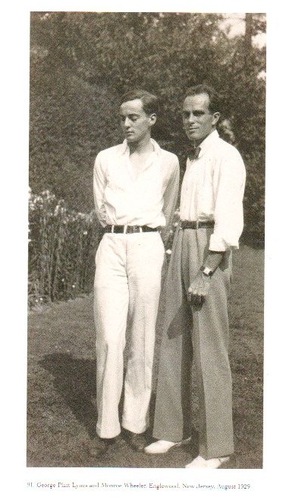 MONROE WHEELER, American curator, born (d: 1988); Poet and author Glenway Wescott and Monroe Wheeler were an extraordinary couple. The two met for the first time in 1919, and it was, it seems, a classic case of love at first sight. At the time, Wescott was still in his teens and Wheeler just 20. Seemingly inured to the social mores of the time and inconstancies of youth, the two embarked on a relationship that can be called nothing short of a marriage, for the next 68 years, until Wescott’s death in 1987.

The young couple traveled the world, stopping in on Gertrude Stein’s Paris Salon and crossing paths with Jean Cocteau on the Riviera, while Wescott developed his poetry and later fiction (he authored The Grandmothers and The Pilgrim Hawk, among other bestsellers of his day) and Wheeler found his path. Eventually he would become the director of exhibitions and publications at the Museum of Modern Art.

The two moved with equal ease through the literary and artistic circles of London and the continent as well as their families’ Midwestern homes. That their relationship thrived is notable enough. But 1927 brought a new challenge to their pairing. High-school student George Platt Lynes fell passionately in love with the strikingly good-looking Wheeler. And Wheeler, for his part, was entranced by Lyne’s ‘full, luscious mouth and his wasp-like waist’. Instead of driving a wedge between Wescott and Wheeler, as might be expected, Lynes soon became part of their shared life. When, after some casting about, he hit upon photography, the two nurtured his career and used their considerable connections to get him both work and gallery shows.

In 1930, while still in France, Wheeler entered into a partnership with Barbara Harrison to establish the Harrison of Paris press, the goal of which was to publish fine editions of new and neglected classics. Over 5 years, they produced 13 titles, including works by Thomas Mann, Katherine Anne Porter, and Glenway Wescott’s A Calendar of Saints for Unbelievers, with illustrations by Pavel Tchelitchev.

In 1935, following the marriage of Barbara Harrison to Glenway’s younger brother, Lloyd, Wheeler and Wescott moved back to the United States. They soon set up households both on the farm in New Jersey bought by Barbara Harrison and Lloyd Wescott and in New York City, where they shared a series of apartments with George Platt Lynes.

It was at this time that Wheeler began an association with the Museum of Modern Art when, in 1935, he guest-curated an exhibit. His position at MOMA became permanent in 1938 when he was hired as Membership Director, then moved quickly into the position of Director of Exhibitions and Publications. Wheeler’s innovations in publication and exhibit design soon became well-known. In 1951, in recognition of his work in bringing French artists to the attention of American viewers, he was made a Chevalier of the French Legion of Honor by the government of France.

In 1967, in preparation for his retirement, Wheeler shifted his duties at the museum. Having long been a trustee of the museum, he was appointed counselor and joined the International Council in its biannual meetings. After his official retirement in 1967, he continued to advise the museum on exhibitions and serve with a number of civic and arts organizations.

In 1969, Wheeler traveled as a cultural advisor with Nelson Rockefeller on a presidential mission to Latin America. In the 1970s, Wheeler travelled extensively and worked on projects documenting the history of MOMA and the collections of the Rockefeller family.

Monroe Wheeler died in Manhattan on August 14th 1988 at the age of 89, 18 months after the death of Glenway Wescott.