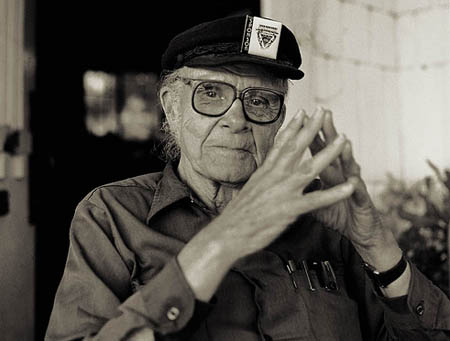 In 1934, Harry Hay attended the legendary Longshoreman’s Strike in San Francisco, known as the San Francisco General Strike, to perform agit-prop theatre with his lover, actor Will Geer. During one of their performances, bullets rang out as the National Guard opened fire on the workers. Several workers were killed in that melee, but more would be killed before the government’s crackdown on the strike ended. The strike culminated with a funeral march on Market Street, San Francisco’s main street, which was the largest public demonstration to take place in its day.

Harry became active in the Communist Party the previous year, drawn to it through his relationship with actor Will Geer. (Geer would go on to entertain millions weekly as Grandpa Walton on the television series The Waltons.) Like many artists and intellectuals of the time, Harry & Geer were drawn to the Communist Party because they witnessed the economic devastation of America’s Great Depression that began in 1929. Millions were out of work, starving and homeless, and economic recovery would not occur until America entered the Second World War in 1941.

Union organizing was often brutally suppressed during this the first half of the twentieth century, in fact, some were outlawed. Harry’s Communist Party Section Organizer, Miriam Sherman “saw countless numbers of my friends beaten and clubbed on picket lines,” and thought she would die on the barricades. But such fears did not stop countless organizers like Harry who went out to fight for those who had no rights. According to Frank Pestana, a labor organizer and lawyer from the period, “The objectives of the Communist Party were objectives that have been realized today and are part of what we live with. They were fighting for workmen’s comp, job security, medical care, all the things that we know and have now. Social security was a dream that they were pushing.”

In 1935 Harry and Geer went to the San Joaquin Valley to organize migratory workers. Like the United Farm Workers, headed by Caesar Chavez three decades later, they fought for fair wages, decent housing conditions, health care and education for children. Harry also became involved with the Hollywood Film and Photo League. Over the course of the next three years Harry worked on a variety of progressive causes including EPIC, Upton Sinclair’s End Poverty in California campaign, Hollywood Anti-Nazi League and Workers Alliance of America.

In 1938 Harry met his wife, Anita Platsky, on the picket lines of a dockworkers strike. As tireless activists, they documented the poor housing conditions in Los Angeles for the Communist Party newspaper People’s World. Through the Second World War, Harry remained active in many political causes including the Theater Arts Committee for Peace and Democracy, Russian War Relief, and the New Theater League.

Harry continued his labor activism until his death in 2002, sometimes working with and speaking to gay and lesbian labor groups. In 2001 he was awarded a lifetime membership in the Industrial Workers of the World.