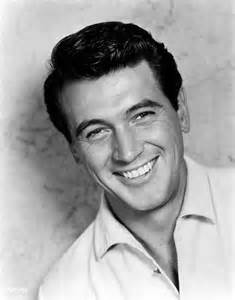 ROCK HUDSON, American actor was born (d. 1985); American film and television actor and a romantic leading man in the 1950s and 1960s. Hudson was voted Star of the Year, Favorite Leading Man, or any number of similar titles by numerous movie magazines and was unquestionably one of the most popular and well-known movie stars of the time. He completed nearly 70 motion pictures and starred in several television productions during a career that spanned over three decades. Hudson also was one of the first major Hollywood celebrities to die from an AIDS-related illness.

While Hudson’s career was blooming, he was struggling to keep his personal life out of the headlines. Throughout his career, he epitomized wholesome manliness, and in 1955, after several male lovers, he wed his agent’s secretary Phyllis Gates. The news was made known by all the major gossip magazines. One magazine story, headlined “When Day Is Done, Heaven Is Waiting,” quoted Hudson as saying, “When I count my blessings, my marriage tops the list.” The union lasted three years. Gates filed for divorce in April 1958, charging mental cruelty; Hudson did not contest the divorce, and Gates received an alimony of US$250 a week for 10 years.

In Gates’ 1987 autobiography My Husband, Rock Hudson, the book she wrote with veteran Hollywood chronicler Bob Thomas, Gates insists she dated Hudson for several months and lived with him for two months before his surprise marriage proposal. She claims to have married Hudson out of love and not, as it was later purported, to stave off a major exposure of Hudson’s sexual orientation. However, after her death from lung cancer in January 2006, several articles suggested Gates was not as innocent as she claimed, and was in fact a lesbian who married Hudson for his money, knowing from the beginning he was Gay.

Rock was good friends with American novelist Armistead Maupin and a few of Hudson’s lovers were Jack Coates; Hollywood publicist Tom Clark, who also later published a memoir about Hudson, Rock Hudson: Friend of Mine; and Marc Christian who later sued the estate. In addition, Darwin Porter’s book, Brando Unzipped (2006) claims that Hudson had an affair with Marlon Brando. Hudson was a close friend of Burt Lancaster, who was reportedly bisexual, and Lancaster’s FBI file suggested the two stars had attended gay parties in Hollywood together.

The book, The Thin Thirty, by Shannon Ragland, chronicles Hudson involvement in a 1962 sex scandal at the University of Kentucky involving the football team. Ragland writes that Jim Barnett, a prominent wrestling promoter, engaged in prostitution with members of the team, and that Hudson was one of Barnett’s customers.

A popular — and false —  urban legend states that Hudson “married” Jim Nabors in the 1970s. While Hudson was in fact a closet homosexual at the time, the two never had anything beyond a friendship. The legend was hatched as a joke by a group of “middle-aged homosexuals who live in Huntington Beach” as Hudson put it; the group sent out joke invitations to “the marriage of Rock Hudson and Jim Nabors” as a front to their annual get-together. The joke – the punchline of which was that Hudson would be known as “Rock Pyle” – was taken seriously, and as a result of the false rumor, Nabors and Hudson never spoke to each other again.

Hudson had been diagnosed with HIV-AIDS on June 5, 1984, but when the signs of illness became apparent, his publicity staff and doctors told the public he had liver cancer. It was not until July 25, 1985, while in Paris for treatment, that Hudson issued a press release announcing that he was dying of AIDS. In a later press release, Hudson speculated he might have contracted HIV through transfused blood from an infected donor during the multiple blood transfusions he received as part of his heart bypass procedure. At the time of his operation, blood was not tested for HIV, which was then unknown.

Hudson lived out the remainder of his life with dignity, withstanding the ravages of his illness and the intrusions of the tabloid press. Hudson flew back to Los Angeles on July 31, where he was so physically weak he was taken off by stretcher from an Air France Boeing 747, which he chartered and was the sole passenger along with his medical attendants. He was flown by helicopter to Cedars Sinai Hospital, where he spent nearly a month to undergo further treatment. When the doctors told him there was no hope of saving his life, since the disease had progressed into the advanced stages, Hudson returned to his house, “The Castle,” in Beverly Hills, where he remained in seclusion until his death on October 2. He was 59 years old.

After Hudson’s death Doris Day, widely thought to be a close off-screen friend, insisted she never knew he was Gay. Carol Burnett who often worked on television and in live theatre with Hudson was a staunch defender of her friend, telling an interviewer she knew about his sexuality and did not care.