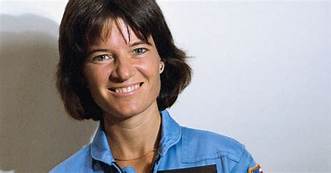 The first American female astronaut SALLY KRISTEN RIDE died of pancreatic cancer on this date (b: 1951) Ride was an American physicist and a former NASA astronaut. She joined NASA in 1978, and in 1983 became the first American woman to enter space. Age 32 at the time of that mission, she also became, and remains, the youngest American to enter space. In 1987, she left NASA to work at Stanford University’s Center for International Security and Arms Control. Ride was one of 8,000 people to answer an advertisement in a newspaper seeking applicants for the space program.

As a result, she joined NASA in 1978. Prior to her first space flight, she was subject to media attention even being asked during a press conference “Do you weep when things go wrong on the job?” During her career, Ride served as the ground-based Capsule Communicator (CapCom) for the second and third Space Shuttle flights and helped develop the Space Shuttle’s robot arm.

On June 18, 1983, she became the first American woman in space as a crew member on Space Shuttle Challenger for. (She was preceded by two Soviet women, Valentina Tereshkova in 1963 and Svetlana Savitskaya in 1982.) On the first Challenger flight, during which the five-person crew deployed two communications satellites and conducted pharmaceutical experiments, Ride was the first woman to use the robot arm in space and the first to use the arm to retrieve a satellite. Her second space flight was in 1984, also on board the Challenger.

She spent a total of more than 343 hours in space. Ride, who had completed eight months of training for her third flight when the Space Shuttle Challenger accident occurred, Ride was named to the presidential commission investigating the accident and headed its subcommittee on operations. Following the investigation, Ride was assigned to NASA headquarters in Washington D.C., where she led NASA’s first strategic planning effort, authored a report entitled “Leadership and America’s Future in Space”, and founded NASA’s Office of Exploration.

In 1987, Ride left her position in Washington, D.C., to work at the Stanford University Center for International Security and Arms Control. In 1989, she became a professor of physics at the University of California, Davis and Director of the California Space Institute.

During the mid 1990s until her death, Ride led the public outreach efforts in cooperation with NASA’s Jet Propulsion Laboratory and UCSD, which permitted middle school students to study imagery of the Earth and moon. In 2003, she was asked to serve on the Space Shuttle Columbia Investigation Board. She was the president and CEO of Sally Ride Science, a company she founded in 2001 that creates entertaining science programs and publications for upper elementary and middle school students, with a particular focus on girls.

According to Roger Boisjoly, the engineer who warned of the technical problems that led to the Challenger accident, Ride was the only public figure to show support for him when he went public with his pre-disaster warnings (after the entire workforce of Morton-Thiokol shunned him). Sally Ride hugged him publicly to show her support for his efforts. She wrote or co-wrote five books on space aimed at children, with the goal of encouraging children to study science.

Ride endorsed Barack Obama for president in 2008. She was a member of the Review of United States Human Space Flight Plans Committee, an independent review requested by the Office of Science and Technology Planning (OSTP) on May 7, 2009. Ride married fellow NASA astronaut Steve Hawley in 1982; they divorced in 1987.

From 1985 until her death, Ride’s partner was Tam E. O’Shaughnessy, a professor emerita of school psychology at San Diego State University, and a childhood friend who met Ride when both were aspiring tennis players. O’Shaughnessy became a science teacher and writer and, later, the chief operating officer and executive vice president of Ride’s company, Sally Ride Science. She co-authored several books with Ride. Their relationship of 27 years was revealed in Ride’s obituary, which was released by Sally Ride Science and confirmed by Ride’s sister. Her sister stated that Ride preferred to keep this information private during her life The Challenger commander, Robert L. Crippen, said he chose her for the 1983 mission in part because of her expertise with the device. She was part of a crew of five that spent about six days in space, during which she used the arm to deploy and retrieve a satellite.

At Cape Canaveral, many in the crowd of 250,000 that watched the launching wore T-shirts that said, “Ride, Sally Ride” – from the lyrics of the song “Mustang Sally.” The next day, Gloria Steinem, editor of Ms. magazine at the time, said, “Millions of little girls are going to sit by their television sets and see they can be astronauts, heroes, explorers and scientists.”When the shuttle landed, Dr. Ride told reporters, “I’m sure it was the most fun that I’ll ever have in my life.”