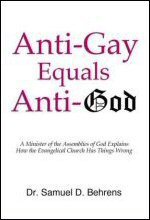 Samuel D. Behrens died of AIDS at age 49 in 2002. Throughout that agony, he poured out his heart—and bile—over his life’s preoccupation: God’s Word in the Bible and religion’s distortion of it. The result was a manuscript that he had his partner, Carlos Mata, promise to publish, Anti-Gay Equals Anti-God.

Behrens grew up in a Pentecostal family, struggled with attraction to other boys, attended Evangel (Bible) College, was ordained and served as associate pastor in the Assemblies of God, left the ministry over his homosexuality, dated women, got engaged but never married, and in 1992 became a Doctor of Jurisprudence. He came out in stereotypical gay promiscuity, which he pursued until he met Carlos and settled down.

He was ever a committed believer. In fact, as was foretold in a Pentecostal gathering, he heard the voice of God—in clear and distinct English. Three times it literally saved his life. Yet his major spiritual turning point occurred only in 1993.  His contact with Evangelicals Concerned brought answers to all his questions about homosexuality and the Bible. He heard a new message: Read closely and with attention to the original languages, the Bible actually says nothing negative about loving homosexual relationships. So strong was his “awe and respect of scripture” (p. 124) and so deep his willingness to understand and live by it that on that very day he was finally able to reconcile his sexuality and spirituality.

Behrens’s 133 pages tell his story of anguish and hope and share the lesson he learned in evangelical faith. At the same time, the book is a tirade against “The Terror of Ignorance” (Chapter Two) that the religious right foists upon LGBTI people. “Use this book,” he writes, “to fight the lies of the radical right from their own theology” (p. 10). “Remember,” Behrens insists, “this is a conservative interpretation of scripture. This is allowing ‘scripture to interpret scripture.’ This is not a ‘liberal’ looking at scripture. This is a Bible-believing Christian who speaks to you from his heart and from the Word of God” (p. 108).

Fully conversant with Bible Religion, Behrens turns its arguments and rhetoric back on itself. “One thing I know is this,” Behrens insists, “the good Lord wanted me to write this book” (p. 45). “The ignorant heterosexists and homophobes who have ‘sat in darkness’ about God’s gay and lesbian children, but who will be forced into the light of day, will sit in disbelief, bewilderment and wonder at all the hateful and harmful things they have said and done, all because of a lie….they are not true Christians” (p. 31). “If you are Christian and you are anti-gay, according to the Bible, you are also anti-God….if you do not repent and pray to Jesus Christ for forgiveness, you will find yourself in the fiery, burning pit of hell” (p. 9).

After three chapters that treat those personal struggles and religious conflicts, the book’s long fourth chapter discusses “eight fallacies” about the Bible and homosexuality. Here, sometimes relying on scholarly historical-critical interpretation and often applying his own creative analyses—the exact style of the biblical literalists—Behrens shows why none of the standardly cited texts is actually condemning.

Regarding “Adam and Steve,” for example, Behrens recalls how Genesis 2 actually reads. Since “it is not good for the man to be alone,” God formed the beasts and fowl for Adam and, only later, the woman. Behrens taunts: Wasn’t God proposing bestiality as the answer to Adam’s loneliness? Doesn’t woman actually rank below the animals? Is this the scheme of life that the literalists want to support?!

Chapter Five movingly tells of the sexual love of David and Jonathan and of Jesus’ approving cure of the Roman centurion’s lover. Chapter Six derides the dishonesty of the Ex-Gay Movement by appeal to Behrens’s own experience: “I told them what I felt [in that room] was a spirit of depression. It was straight out of hell. I had never met so many Christians in one place who were such depressed and lonely men” (p. 122). Again appealing to personal experience, Chapter Eight portrays “The Pain of Rejection” and the destruction of friendship and family that anti-gay religion effects. And from the Conclusion, after a list of “I’m tired of’s”—anti-gay exegesis, church gossip, “the bull-feces from these so-called Moral Majority people” (p. 130), gay suicides, and more—comes the Christian ending: “God, thank you for showing me love and for showing me forgiveness. Please God, forgive me my righteous anger….My brothers and sisters, do not let the opinions of others stop you from being your [God-given]self; be all you can be” (p. 133).

To anticipate discrediting nit-picking by the religious right, errors in this book must also be acknowledged. * The mix of critical and literal reading raises questions throughout. According to the scholars, Jesus certainly never claimed to be Messiah or God. On the other hand, the literal reading clearly suggests that Jesus did intend to found a religion: “I will build my church,” “tell it unto the church,” and “Go ye therefore, and teach all nations, baptizing them” (Matthew 16, 18, 28). * Similarly, Behrens’s interpretations of Leviticus 18, Romans 1, 1 Corinthians 6, and 1 Timothy 10 are a hodge-podge of different theories. Above all, the supposed role of homosexual intercourse in pagan rituals is not the reason that those texts are irrelevant to today’s discussions. Moreover, the pivotal term arsenokoitai in 1 Corinthians and 1 Timothy comes from only two Greek words (arsen = male + koite = bed, sex, seminal emission). It is a simple plural noun. It means “men who bed”; it does not mean “‘the man having many sexual beds’” (p. 106). One hopes that people writing popularly about homosexuality in the Bible would finally get the historical facts right and stop citing early—and oftentimes frivolous—pro-gay attempts to discredit the biblical texts. The Fundamentalists delight to see such disarray within the religious gay-liberation movement. * God’s love and grace do not, indeed, depend on one’s changing one’s homosexuality (pp. 57, 60); nonetheless, whether one may act on it remains a valid, further question. * Stoicism had already crystallized the theory of natural law in the early Common Era; Thomas Aquinas is noted “merely” for his definitive summary of the theory (p. 78).* The logical fallacy of drawing a conclusion from the fact that nothing was said is argumentum ad ignorantiam, not argumentum ignoratum (p. 82).

In addition, common evangelical prejudices taint Behrens’s rhetoric. * Before the Protestant Reformation, there was only the Christian Church, so blaming Catholics for all the flaws inherited from the first 1500 years is dishonest (pp. 62, 70, 100). * Similarly, Jews and Muslims do not need to believe Jesus is God (pp. 58, 62). * The American founders were Enlightenment figures and often secularist Deists; it is simply untrue that “our society was founded upon the truths of the Word of God” (p. 131). * Behrens’s own insistence on the “Law of Love”—and the insistence of the Christian scriptures, e.g., Jesus’ own “By their fruits you will recognize them” (p. 87) or James 2:14: “What doth it profit, my brethren, though a man say he hath faith, and have not works? can faith save him?” (p. 97-98)—contradicts his repeated insistence that, “to be saved,” one need only believe that Jesus is God (pp. 56-57, 62, 76). This appeal to faith alone and scripture alone comes from Martin Luther and John Calvin, not the scriptures. The inconsistency that results makes clear that the Evangelicals are not taking the Bible “as it reads” but see it through the lens of their own history and personal experience. If so, their all-controlling notion of salvation through faith is their own, not the Bible’s or God’s.

In the same vein, Behrens’s preoccupation about heaven and his threats of hell perpetuate the debilitating fear that drives most evangelical religion, the very fear he wrote his book to dispel. And his very self-assured condemnations—for example, to his aunt: “You were fornicators!” (p. 83)—mirror the arrogance and spiritual abuse of the religious right. Sadly, such traits seem to be inherent in that style of religion. In a global community where religion has become a key problem, the ultimate goal of any believer, gay or straight, must be to transcend particularist religion and achieve an all-encompassing spiritual vision. Their anti-gay agenda distracts the Bible religions from the important issues of our day and limits the spiritual growth of even the best intentioned believers—as Behrens’s case evinces.

All criticism aside, Behrens is right on target!  This book is a powerful tool for exposing the error and hate of anti-gay religion. As intended, it should provide freeing insight to faith-strapped LGBTI people and their families. Unfortunately, its challenging rhetoric will hardly reach the anti-gay leaders and convinced believers, whom the book also addresses. Still, this cogent, pro-gay, religious rhetoric turned against homophobia does afford perverse delight. Oh, to see in print in one small book all the diatribes, arguments, and condemnations that—God forgive us, too—so often rise from our hurt and color our private gay conversations!

Sam Behrens has given a valuable gift to the LGBTI liberation movement. Christian to the end, he transmuted his spiritual struggle into a liberating legacy.

Daniel Helminiak, PhD, PhD, LPC, is Associate Professor of Psychology at the University of West Georgia. He is author of the seminal and award-winning What the Bible Really Says about Homosexuality and, more recently, Sex and the Sacred: Gay Identity and Spiritual Growth and Meditation without Myth and is a member of the Advisory Board of White Crane Institute. Visit his web site at www.visionsofdaniel.net.