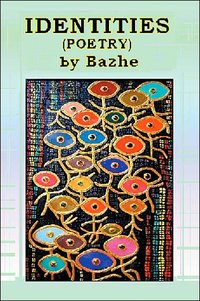 Three years ago, I had both the privilege of reviewing Bazhe’s memoir, Damages, and the pleasure of hosting him during book signing appearances in the Twin Cities. A native of Macedonia, he’s had a remarkable life that could have damaged a weaker soul beyond repair. A spirited free-thinker, talks with Bazhe offer fascinating insights into the ways of the world. His perspectives seldom follow the norms, especially for someone transplanted from another country, but Bazhe has thoughts and opinions that he’s not afraid to articulate.

We talked at length about the craft of writing, and he shared thoughts and ideas for a planned book of poetry. I was excited when this book came to fruition. Like its author, Identities is deeply passionate, with an energy and an emotional charge that’s unsurpassed. He’s chosen to analyze the manipulations of humanity: greed, ignorance, destruction, war, politics and much more in his poems.

Bazhe’s work may, for the most part, lack iambic pentameter. That expected rhythm is found only rarely in this collection, as with Where is Freedom, Dove? that reads like the lyric for a 60s pop song. However, this prose poetry and the philosophical

observations they impart aren’t lacking in metaphors and imagery. He divides his work into eight sections. In Part I, "Whispering in Front of the Cosmic Altar," he acquaints readers who haven’t read Damages with the views of the world he’s encountered during his early years. In "My Life is My Damn Question," for example, his anger overflows, but he blames the quill of his pen. Bazhe often sees the world from the eyes of a poem’s principal character, be it Vampire, Cat, Secret Lover or energy itself.

One particular poem, "The Zoo," is especially striking because, while Bazhe fears the worst and he suspects misunderstanding, he’s been seduced, so he’ll go along with his friend, no matter the outcome. While a somber melancholy is a recurring theme in Identities, sometimes, Bazhe’s writing takes on sexy undertones as in both "Without a Prospect" and "Self-Love." In the former, he comments about things going on in the world around him as he nonchalantly masturbates, while in the latter, he reflects on his reflection, captured in a half-dozen mirrors as he gleefully covers them with sperm.

Like his conversations, the poetry of Identities precisely captures Bazhe’s particular viewpoints. Identities is a crowning achievement from the writer whose Damages has impacted so many of us.

Steven LaVigne is a regular contributor to White Crane.  He lives in the Twin Cities.