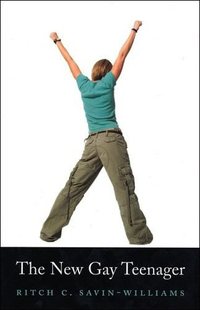 This is, when all the research is digested and filed away, a hopeful book…much more so than “post-Gay” assimilationists, this book examines the incremental, generational, time-changing success gay liberation has actually had by looking at our children. I am always reminding myself that we’ve only been doing this for 30 some years and black people have been at it for a century or more and look where they are. I am hopeful for a time when “gay” ceases to be an “issue” without having to undergo utter assimilation. Liberation has always had a political component to it. Savin-Williams reminds us that there is a huge psycho-social aspect to it, too: nothing less than the greatest perpetration of child sexual abuse by the hetero-dominant culture against our gay children.

Gay, straight, bisexual: how much does sexual orientation matter to a modern teenager’s mental health or sense of identity?

In this award-winning, down-to-earth book, filled with the voices of young people speaking for themselves, Professor Ritch Savin-Williams argues that the standard image of gay youth presented by mental health researchers—as depressed, isolated, drug-dependent, even suicidal—may have been exaggerated even twenty years ago, and is far from accurate today.

The New Gay Teenager gives us a refreshing and frequently controversial introduction to confident, competent, upbeat teenagers with same-sex desires, who worry more about the chemistry test or their curfew than they do about their sexuality.

What does “gay” mean, when some adolescents who have had sexual encounters with those of their own sex don’t consider themselves gay, when some who consider themselves gay have had sex with the opposite sex, and when many have never had sex at all? What counts as “having sex,” anyway? Teenagers (unlike social science researchers) are not especially interested in neatly categorizing their sexual orientation.

In fact, Savin-Williams learns, teenagers may think a lot about sex, but they don’t think that sexuality is the most important thing about them. And adults, he advises, shouldn’t think so either.

In this lively and broadly researched book, Cornell University psychologist Savin-Williams reveals that the words gay teenagers use to describe their sexual preferences have changed radically over the past 30 years, and so have attitudes towards same-sex relationships. In fact, many of them are reluctant to define their sexuality at all. “In some respects,” Savin-Williams explains, "these teenagers might relate better to their pre-labeled, pre-identified grandparents than they do with their gay-liberated parents or their gay-resigned older cousins.” “For them ‘gay’ carries too much baggage,” and apparently they get along just fine without it. Much of the volume is devoted to Savin-Williams’ detailed critique of the psychological models currently used to study gay adolescence, which were developed in the 1970s and have barely changed since. These old models, Savin-Williams argues, don’t reflect the diversity of the current gay adolescent experience and should be replaced with a “differential developmental trajectories perspective.”

His book is an excellent resource for professional psychologists with gay patients, but it also contains enough invigorating, real-world case studies to interest general readers. The book was awarded the 2005 Distinguished Book Award, from the American Psychological Association.

Bo Young is Publisher and Editorial Director of White Crane.