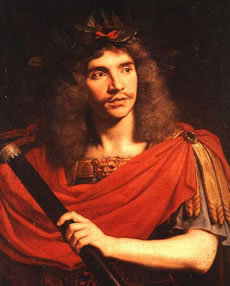 Today is the birthday of Molière (1622-1673).
The French playwright is considered the greatest writer of French comedy and is known for his plays "Les Femmes Savantes," "The Imaginary Invalid,"  "Sganarelle, ou le Cocu Imaginaire," "Tartuffe" and many other masterpieces of Commedia dell’arte.
Martin Greif writes that when Molière was in his late forties he fell in love with Michel Baron and brought him home to live with him.  When the playwright’s wife protested Baron moved out till Molière ordered him back.  When his wife made an ultimatum that the playwright choose between her or Baron, Molière chose.  Three years later, when the Molière died, Michel Baron was at his side.
//| //| //|
TODAY’S GAY WISDOM
“One should examine oneself for a very long time before thinking of condemning others” ~Molière

“The trees that are slow to grow bear the best fruit.”  ~Molière

“I prefer an interesting vice to a virtue that bores”  ~Molière

“To live without loving is not really to live." ~ Molière

And knowing money is a root of evil, in Christian charity, he’d take away whatever things may hinder your salvation. ~ Molière
I assure you that a learned fool is more foolish than an ignorant fool. ~ Molière
Let us drink while we can, One cannot drink forever. ~ Molière
Of all the noises known to man, opera is the most expensive. ~ Molière
“Things only have the value that we give them”  ~Molière
//| //| //|