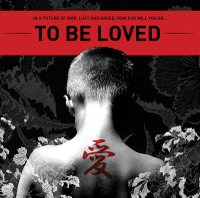 “To Be Loved”
Ah, to be loved! Review by Perry Brass

I had been intrigued about seeing “To Be Loved,” the play by Alex DeFazio at the tiny Chashama Theater on East 42nd Street because the drama is based on a famous kabuki spectacle, “The Scarlet Princess of Edo,” from 1813, and I had been fortunate to see the Grand Kabuki of Tokyo perform it on one of their once-a-decade tours of America in 1986. I remember the Grand Kabuki very well; it was headlined by Tamasaburo Bando IV, perhaps the world’s greatest inagaka actor, a kabuki term for a man who specializes in female roles, and “The Scarlet Princess,” at tale of karma, reincarnation, and the eternality of love, is a tour de force for inagaka: a priest and a young acolyte, in love in a monastery, are forced to commit suicide when their forbidden love is discovered. In the next generation, the reincarnated priest discovers his lover in a young, virginal girl and pursues her, only tragically to lose her. The actors have to show that they have other characters inside the characters they are portraying, with maleness inside femaleness; in fact, in kabuki tradition, maleness inside femaleness inside more maleness. Quite an order. In “To Be Loved,” a similar tale is told, set in a post-Apocalyptic world after the bombs have gone off (we’re never quite sure which bombs), centered on an older priest’s love for a young student who kills himself by jumping off a cliff (the same method used in the “Scarlet Princess”) leaving the priest, twisted by guilt, to depart the priesthood and try to go “straight.” 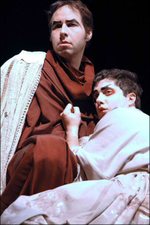 Straight means that he, Seigen, played ably by Albert Aeed, will bed Dorian, wildly acted by Kelly Marcus, the filthy rich daughter of a bomb-making, omni-horny privateer, who is oft alluded to but not seen in the play. Dorian is man-hungry, and has a boy-toy of sorts in the gorgeous shape of Dis, Bobby Abid, a Stanley Kowalski-type (but sexually dysfunctional) hunk who is also a pimp for Anon, a young whore of a certain androgyny. So, of course you can see what will happen: Seigen will discover the lost soul of Paul, the boy, in the personality of Anon, who, played by Elizabeth Sugarman, is a pivotal character in the action; she is sensitive, tough, wily, vulnerable, and goes through the gamut of bondage and liberation, but, alas, is never really allowed to be really androgynous. In fact, it is hinted that she is hermaphroditic, although I can’t understand why, as a $20-whore, she is so popular and nobody knows what’s really “down there.” You’d think that at a certain point the equipment would come out; and with better direction, Anon’s undeniable, androgynous attractiveness would have been more evident. She is a Garbo-esque femme-fatale in a brutal world where technology has broken down, violence is everywhere, and human connections are barely tenable. (I know, you’re asking what else is new?) As a character, she could be a stunner, and I don’t think it’s Sugarman’s fault that it’s not happening here, because she’s an interesting actress.

What I liked about “To Be Loved” was that it held to some kabuki elements in its crazy-future setting: the costumes, which were inventive, especially Anon’s ratty kimono and Dis’s deliciously cartoony body armor, reflected this; also the use of red silk scarves to denote blood: very Grand Kabuki. Also the acting tended to be stylized, and the use of loud snapping sounds and other tonal devices were Eastern. Where the play soured was the author’s use of portentous speeches; the plot, or what was trying to be the plot, became so elliptical that at points in the first act I, and a lot of the audience, was lost. The first act could haven been trimmed by 20 minutes; the second, though, came together better, was easier to follow, and shows us that in the drear future, money will trump passion all the time: or, duh?, did I miss out on the last six episodes of “The Bachelor”?

Albert Aeed as Seigen is a fairly Ted Haggard character: all lust, prohibitions, inhibitions, guilt, and meanness. But he is redeemed, sadly enough, by his own true heart, seeking Paul, the Ganymede-like boy he pushed earlier out of his life to suicide, then finally finding him. This is a play about the worship of strange beauty, something I am thrilled with, and Chashama kept much of that intact. The tiny theater backs on to a plate glass store-front window on 42nd Street; the stage’s rear black-out curtains are opened at moments in the action, and life in New York pulses in. Strange beauty, always.

To Be Loved will be performed at Chashama, 217 East 42nd