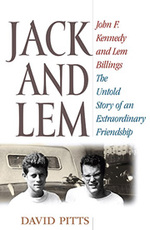 Starting with the cover photo of six people, including President Kennedy and LeMoyne Billings, the May issue of Houston’s OutSmart Magazine has an article based on a new book, by David Pitts, Jack and Lem: John F. Kennedy and Lem Billings-the untold story of an extraordinary friendship, published by Carroll Graf. My question to not only the homosexual community, but to all those journalists, since the 60s, and the dozens of historians and authors who made lots of money writing about President Kennedy and all the Kennedys, is, why has no one told the public this before?

I think the media also hid the many women President Kennedy had sex with, but they finally talked about that. Perhaps heterosexual writers didn’t think Lem was of interest. But, in a sense contradicting myself when I’ve complained about our gay media trying to out celebrities, and putting merely gay-friendly celebrities on their covers and in their pages, as if we would be happier-gayer-if famous rich and cute people were also homosexual, it seems to me that this friendship is of great interest in knowing how our government acted on sexuality in the 60s and after when the homosexual movement for civil rights was slowly but surely growing.

A major issue is that the most powerful person in the world had a lifetime friendship with a homosexual, and everyone in the White House, and the family members all along, knew this, and so you have to ask why no one mentioned this all these years. The issue is a major one also because those who started this movement were accused of alerting the public to homosexuality and thus scaring off possible sex partners.

And the author covers this issue this way: "That’s one point I tried to make in the book in one of the chapters. Ironically, in some ways gay people had more license at that time than they do now. Homosexuality wasn’t on the radar screen, the general population wasn’t really aware of it, and so, in a sense, gay people could do certain things, such as the example you gave, and it did not come under suspicion the way it clearly would today."

So those people who complained that once Mattachine stopped being secret, and became public as ONE Magazine, their easy find of sex partners would be hurt, had a point. Can heterosexual men and women have close friendships with homosexual men and women without being called homosexual? Will this book be almost as important as Brokeback Mountain in getting all of us to think about homosexuality?