The Tender, Button Down Mind of of Gertrude Stein… 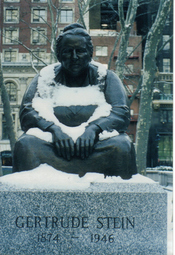 There’s a wonderful store on the Upper East Side of New York called Tender Buttons. You can buy almost any kind of button you might need there…Prices range from 50 cents for simple white buttons to hundreds of dollars for gorgeous antique gold buttons, some inlaid with semi-precious stones.

Buttons are held in rows of tiny boxes, with samples displayed alongside impeccably handwritten descriptions and provenance: "Faux horn chunks from Italy," or "A well-designed brown button from France." Most prices are per button, although rare sets — boasting inlaid Swarovski crystal or 18th-century enamel from Japan — are also available. Just be sure to stitch these babies on tight. Somewhat appropriately, there is no website, so: Tender Buttons 143 E 62nd St, New York, NY 10021-7688  Phone: (212) 758-7004

Tender Buttons is also one of the great Modern experiments in verse by Gertrude Stein, the great Lesbian writer, poet, playwright, "saloniste" who died on this day in 1946. Simultaneously considered to be a masterpiece of verbal Cubism, a modernist triumph, a spectacular failure, a collection of confusing gibberish, and an intentional hoax, the book is perhaps more often written about than actually read.

Published in 1914, Tender Buttons is one of the great Modern experiments in verse. Simultaneously considered to be a masterpiece of verbal Cubism, a modernist triumph, a spectacular failure, a collection of confusing gibberish, and an intentional hoax, the book is perhaps more often written about than actually read.

Divided into three sections—"Objects," "Food," and "Rooms"—the book contains a series of descriptions that defy conventional syntax. William Gass notes that these are, respectively, "things external to us, which we perceive, manipulate, and confront," "things which nourish us," and "things which enclose us."

An American by birth, Gertrude Stein lived as an expatriate in Paris for most of her life. At once a novelist, an essayist, and a poet, she was famous for hosting evening salons that gathered together the great thinkers, painters, and writers into one room, and sparking (and recording) their exchange of ideas. Besides Tender Buttons, her major works in verse include Patriarchal Poetry and the somewhat more accessible Stanzas in Meditation.

Tender Buttons is not frequently anthologized, perhaps because it is meant to be read as a single, long prose-poem. However, notable selections include "Suppose an Eyes," "A Carafe, That is a Blind Glass" in which she seemingly announces her intentions towards Cubism, as well as "In Between," which is often read as a feminist poem because of its strong (though abstract) themes of sensuality. Another noteworthy poem is "Orange In" from "Food," which contains both the repetition and word-combining that many consider to be cubist.

Still avant-garde and experimental ninety years since its first publication, Tender Buttons has inspired generations of experimental poets, providing inspiration for the Language movement, as well as a variety of imitations— both successful and not. She is beloved and cited as influence by many poets and novelists, including William Gass, Sherwood Anderson, E. E. Cummings, Ernest Hemingway, and Harryette Mullen.

Finally…here’s a button I’d like everyone to have on their computer…click to see it enlarged…: